Huestis Scott received the award for her exceptional work in promoting human rights in the province. Her literary works are a source of inspiration, especially for young people, because they emphasize a better understanding of human rights.

She is the author of The Boy Who Was Bullied, published in 2011, which tells the story of John Peters Humphrey, the drafter of the Universal Declaration of Human Rights. In December 2012, Huestis Scott was invited to the United Nations in New York for the international launch of her book, presented by Canada’s former ambassador to the United Nations, Guillermo Rishchynski.

In 2013, Hemmings House Pictures produced a CBC-sponsored documentary entitled The Boy Who Was Bullied, which was distributed across the country. Over the years, Huestis Scott has made more than a hundred presentations in schools in Canada and the United States about her book, and has helped some schools to perform plays based on it.

Recently, she published the children’s book Let’s Make It Right, which explores children’s rights in the world. It is designed to show them that they have rights, regardless of who they are, where they live, the language they speak, their gender, their ethnicity, or their social class.

The award, a sculpture of walnut and maple with the names of the recipients engraved on the base, is on permanent public display at Government House.

The award was established by the commission in 1988 to commemorate the 40th anniversary of the Universal Declaration of Human Rights. Each year, the award is given by the commission to an individual or group from New Brunswick that has shown outstanding effort, achievement and leadership on a volunteer basis in the promotion of human rights. Nominations are solicited from a wide variety of groups. 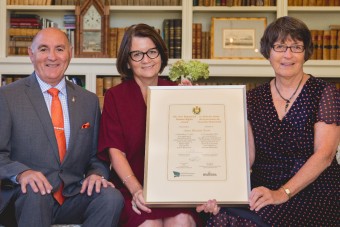