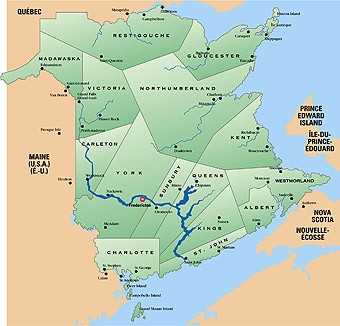 New Brunswick covers 73,440 square kilometres in roughly a rectangle shape about 242 kilometres (150 miles) from east to west and 322 kilometres (200 miles) north to south. Its northern reaches are dominated by mountains that are part of the Appalachian Range.

Mt. Carleton, at 820 metres (2,690 feet), is the highest. The interior of the province is mostly rolling plateau virtually covered by forests.The eastem region is fairly flat, the southern terrain is rugged.

The magnificent St. John River, often called The Rhine of North America, splits the province from north to south.

New Brunswick has a blend of climates typical of a coastal area and of an inland province. January is generally the coldest month in New Brunswick and July is the warmest; however, influxes of moist Atlantic air produce mild spells in winter and periods of cool weather in summer.

Summers are typically warm and comfortable, but not too hot. Along the Bay of Fundy coast, average daytime highs vary between 20 and 22°C in the summer, with higher temperatures as you move inland.

Many pleasant but cooler days are experienced in spring and autumn. Spring and early summer are notably dry over New Brunswick, but there is ample water during the growing season. The interior highlands record about 1,200 millimetres of rainfall a year, with the heaviest amounts falling during the summer months.

In winter, average temperatures decrease noticeably from south to north. The interior, which has elevations above 600 metres and is more directly in the path of continental air masses, often experiences very cold winters. As one moves south, however, this coldness is gradually tempered by the effects of latitude and, to a greater extent, the sea. Coastal locations such as St. Andrews and Saint John experience moist Atlantic air most of the year, producing mild periods during the winter and cool weather the rest of the year.