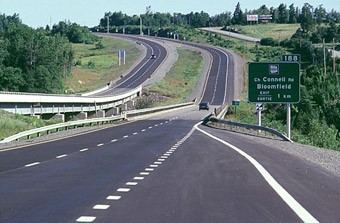 New Brunswick enjoys a multimodal, modern transportation infrastructure, with more than 18,000 kilometres of highways and secondary roads crossing the province, convenient air connections to major cities throughout North America and to several destinations in Europe, as well as rail and sea connections through the national ports in Saint John and Belledune to major world markets.

New Brunswick has a network of well-maintained highways, with many kilometres of four-lane expressway connecting the major centres via the Trans-Canada Highway, Route 2, as well as Routes 1, 7 and 15.

Speed limits are posted in kilometres per hour and most major highways have posted speed limits of 100 km/h (62 mph), with many four-lane sections being 110 km/h (68 mph). The standard maximum limit is 80 km/h (50 mph) on provincial highways and 50 km/h (30 mph) in urban districts unless otherwise indicated.

Seatbelts are mandatory for drivers and passengers. Children under five years of age and under 18 kilograms (40 lbs.) must be in an infant carrier or approved child restraint. The carrying (transporting) of radar detectors in vehicles is prohibited whether the device is in use and connected or not. Vehicles in New Brunswick drive on the right and pass on the left, as they do in all Canadian provinces and territories.

It is illegal to use cell phones and other hand-held devices while driving in New Brunswick. This includes hand-held cell phones, portable GPS, and entertainment devices.

United States driver's licenses are valid for operating a motor vehicle in New Brunswick, as are those of most European nations. Unleaded and diesel gas are available throughout the province and are sold by the litre. There are 3.78 litres in one US gallon, 4.54 litres in one UK gallon.

The driver of a motor vehicle meeting or overtaking a school bus which is displaying red flashing lights must stop not less than 5m (16ft.) from the bus and must not pass until the bus is again in motion or the lights have stopped flashing.

New Brunswick is connected to the rest of North America and to Europe by major airlines, including Air Canada Jazz, Westjet, Continental Airlines and Delta Air Lines.

Round-trip passenger rail service through New Brunswick is provided three days per week by VIA Rail on the Ocean, a full-service train with stops in Moncton, Miramichi, Bathurst, Campbellton and several smaller centres.

Intercity bus service is available between many New Brunswick communities, with connections to the rest of Canada and the United States. The largest service provider is Maritime Bus.