“The council received this award for its decades of outstanding work in promoting human rights, diversity and inclusion in communities across New Brunswick,” said New Brunswick Human Rights Commission chairperson Nathalie Chiasson. “More recently, the council has been prominently and actively engaged in the welcoming and settlement of Syrian refugees. The work of the council and its member agencies was instrumental; they provided programs, co-ordination and opportunities that directly helped hundreds of Syrian families begin a fresh start in New Brunswick.”

“It is a tremendous honour to receive the New Brunswick Human Rights Award, especially on the 50th anniversary of the Human Rights Commission,” said council president Mike Timani. “New Brunswick and Canada have come a long way since the New Brunswick Multicultural Council was established in 1983, but the work of promoting diversity, inclusion and human rights is as important now as it has ever been. Our province and our country can only prosper if all of our residents – those born here and new Canadians alike – can achieve their full potential and live free from prejudice and discrimination.”

The council has been active on local, provincial and national fronts over the years and played a part in the creation of the Canadian Multiculturalism Act in 1988. The council works with 16 local multicultural associations throughout New Brunswick. It provides a unified voice for the province's multicultural sector and also provides co-ordination and support for provincewide projects.

“We live in a province and a country that both set the standard for freedom, inclusion and diversity,” said Chiasson. “We have so much to be proud of today and throughout our history but we cannot simply enjoy that pride. We must educate ourselves about the challenges we face and the opportunities that await us. We must be active participants in the continuing evolution of human rights.” 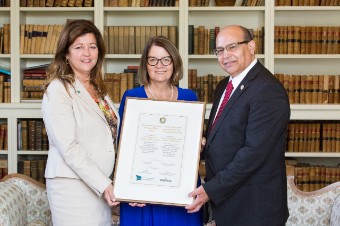