FREDERICTON (GNB) – Legislation to be introduced this week aims to help protect New Brunswickers, particularly youth, from harm associated with cannabis use.

The new laws would set the minimum legal age for buying cannabis at 19, restrict young people’s access to cannabis, set criteria for the possession and use of cannabis, and establish penalties for drug-impaired driving.

“We have listened to New Brunswickers and want to protect vulnerable people by getting cannabis out of the hands of criminals and youth and putting reasonable measures in place so that it is used responsibly by adults,” said Health Minister Benoît Bourque.

“We are focused on ensuring protection for the well-being of families and children,” said Justice and Public Safety Minister Denis Landry. “That includes the safety of our streets, roads and highways. Our amendments to the Motor Vehicle Act will establish a drug-impaired driving program to complement proposed changes to the Criminal Code of Canada respecting drug-impaired driving.”

The new Cannabis Control Act would set the legal age for the purchase, consumption and cultivation of recreational cannabis at 19. Under the proposed legislation, it would be prohibited for anyone under 19 to:

The act also outlines general restrictions on cannabis consumption and possession. Adults would be permitted to carry on their person up to 30 grams, unsealed, in accordance with the federal Cannabis Act. Cannabis stored in a private home would have to be in a locked container or a locked room to ensure it is kept from minors.

Consumption of recreational cannabis would not be permitted in public places.

The act also includes requirements to secure cannabis when it is being grown on private property, either indoors or outdoors.

Amendments to the Motor Vehicle Act would establish a drug-impaired driving program. Proposed sanctions include:

The new Cannabis Control Act, the proposed amendments to the Motor Vehicle Act, and the Cannabis Education and Awareness Fund Act are among the legislative proposals related to cannabis legalization to be introduced in the current legislative session. 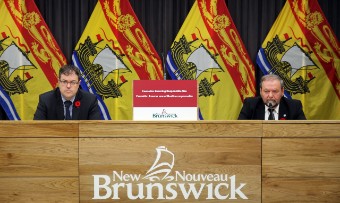