Richard was selected due to his exceptional work in the promotion and advocacy of rights-based issues within the province. He is well-known in New Brunswick as a former Ombudsman and was the province’s first Child and Youth Advocate.

Richard spends a great deal of time and energy working in the area of human rights both provincially and nationally. His work with Dots NB has helped to bring attention and government support to the mental health challenges faced by youth. He volunteers for several non-profit organizations, most in the area of children’s rights and issues, including a Working Group on the Rights of the Child in French-speaking countries, the First Nations Children Futures Fund, and Partner’s for Youth Inc.

The award, a sculpture of walnut and maple with the names of the recipients engraved on the base, is on permanent public display at Government House.

The award was established by the commission in 1988 to commemorate the 40th anniversary of the Universal Declaration of Human Rights. Each year, the award is given by the commission to an individual or group from New Brunswick that has shown outstanding effort, achievement and leadership on a volunteer basis in the promotion of human rights. Nominations are solicited from a wide variety of groups. 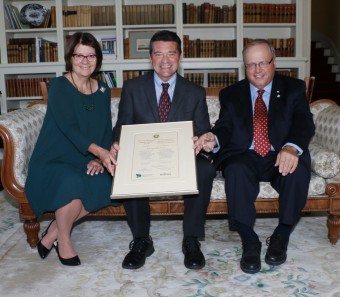