The Late Paleozoic Maritimes Basin of Atlantic Canada is an extensive successor basin that formed in the wake of the Early to Middle Devonian Acadian Orogeny. In New Brunswick the basin is characterized by thick accumulations of dominantly sedimentary rocks deposited in alluvial, fluvial, lacustrine and marine environments. Exploration in the southern New Brunswick segment of the Maritimes Basin is currently focused on a wide range of economic and potentially economic hydrocarbon and metallic mineral resources.

Research has determined that specific stratigraphic intervals within the sedimentary pile are responsible for sourcing and accumulating resources, and that the structural and depositional history of the basin played critical roles in the formation, timing and distribution of deposits. 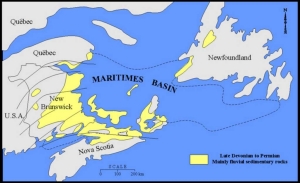 Distribution of Late Devonian-Permian rocks in the Maritimes Basin 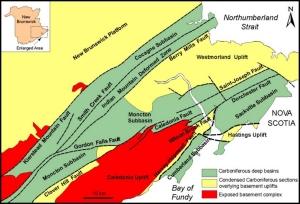 Distribution of subbasins and uplifts in the Maritimes Basin 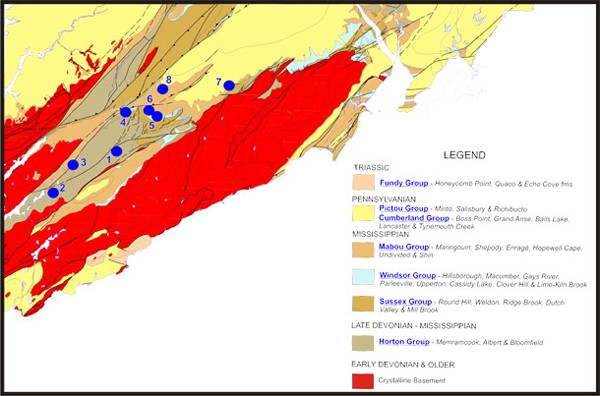 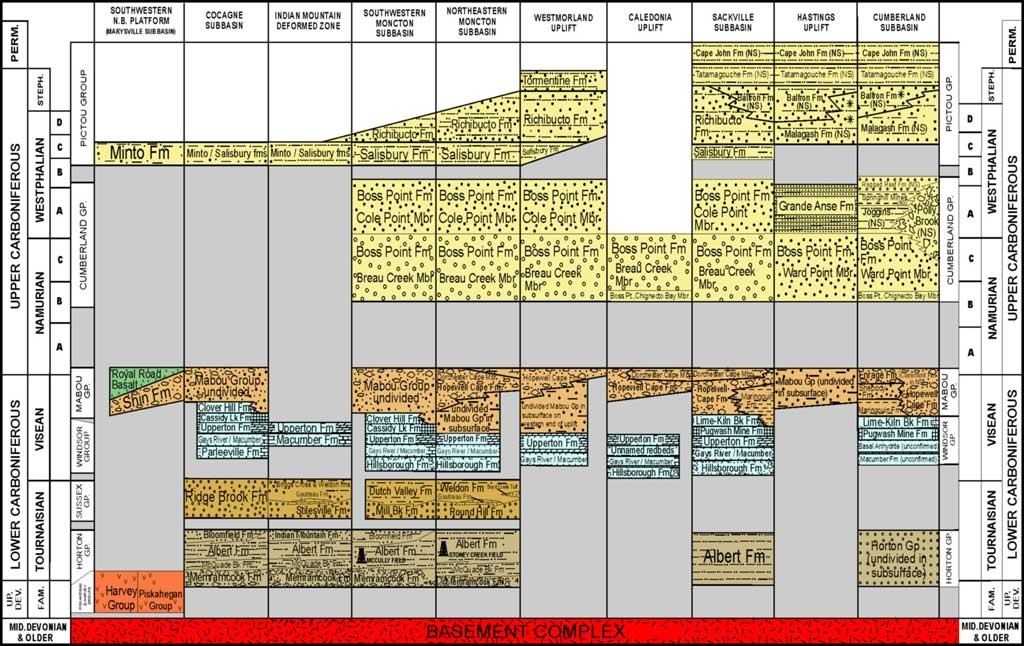 This stratigraphic column shows the major groups of strata that occur throughout the Maritimes Basin in southeastern New Brunswick. The basin fill is characterized by dominantly sedimentary rocks deposited in alluvial, fluvial, lacustrine and marine environments. Research has determined that specific stratigraphic intervals within the sedimentary pile are responsible for sourcing and accumulating hydrocarbon resources. The structural and depositional history of the basin also played critical roles in the formation timing and distribution of these deposits.

There are 3 major types of base metal sulphide occurrences in Carboniferous rocks:

There are 2 major types of uranium occurrences in Carboniferous rocks: 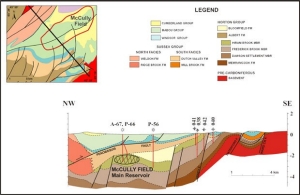 Recent exploration in the historic Stoney Creek Field includes a 3D seismic survey conducted over the field and a drilling program of horizontal wells in the main productive sandstone reservoir. An extensive test of approximately 24 shut-in gas wells and 6 oil wells was carried out to confirm productive capacity.

The Province had a major discovery of natural gas at the McCully Gas Field near Sussex in 2000. From this field there are presently two producing wells providing fuel for the Potash Corporation of Saskatchewan Inc. (PCS) potash mill at the rate of 2 million cubic feet per day. Seventeen wells have already been drilled and readied for production, with another 16 wells planned over the next two years. The McCully Field is estimated to contain an in-place gas resource of one trillion cubic feet. Plans have been submitted to construct a 45 km long lateral pipeline to connect the McCully Field with the Maritimes and Northeast mainline. The pipeline is scheduled to be completed by May 2007.

Another possible potential hydrocarbon resource in New Brunswick is “shale natural gas”. This rather unconventional source of natural gas has over the past decade become a significant contributor to the North American gas supply. For example, unconventional gas resources currently account for nearly 10% of the total natural gas production in the United States. In 1985 there were about 100 shale gas wells drilled in North America, today there are over 12,000 of these wells.

In New Brunswick, organic-rich shales acted as the source rocks for the natural gas now held in conventional sandstone reservoirs, such as Stoney Creek and McCully. The thick organic-bearing shales of the Albert Formation of New Brunswick are believed to have potential for holding large volumes of natural gas. The Albert shales are just one example of several similar shales in other onshore and offshore basins in eastern Canada. 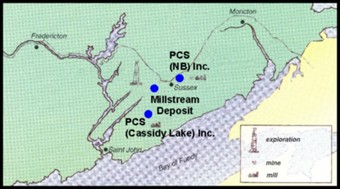 Substantial thicknesses of potassium, sodium-, and magnesium-bearing salts have accumulated in three areas of the Moncton Subbasin, namely, the Penobsquis, Cassidy Lake and Millstream potash/salt deposits. Click blue dots for more information about each deposit. 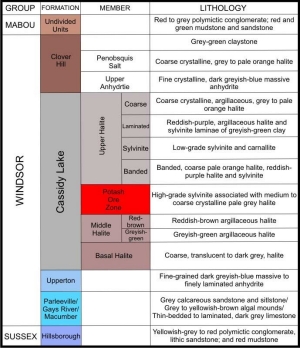 The deposits are situated within the Early Carboniferous Windsor Group. The stratigraphy of the Windsor Group is outlined here.

Depositional Synopsis
Two depositional evaporate cycles are represented in the Moncton Subbasin near Sussex. The first and most significant event led to the deposition of a regional carbonate/sulphate (Parleeville, Gays River, Macumber formations/Upperton Formation) sequence, with highly concentrated evaporates (Cassidy Lake Formation) preserved in local depositional troughs; one 5 km east of Sussex (Penobsquis), a second about 25 km southwest (Cassidy Lake), and a third 10 km west (Millstream). At Penobsquis and Cassidy Lake basal evaporates consist of clean halite with minor anhydrite while nearby at Millstream the same interval is represented by claystone. These units are in turn overlain, at all three deposits, by argillaceous halite, then potash (sylvinite), and capped by a heterogeneous halite unit interbedded with varying thicknesses of sylvinite and, locally, carnallite.

The first-cycle evaporate deposits are characterized by:

The Penobsquis and Cassidy Lake deposits represent the infilling of deep depressions at the southern end of the Moncton Subbasin by salts derived from marine brines that had been progressively concentrated in a series of fore-basins and modified by hydrothermal solutions. Bitterns (bitter liquid that is left after salt has crystallized from sea water) from the larger stages of this infilling were periodically flushed into the more remote, and isolated Millstream depression, leading to the development of an extreme thickness of potassium and magnesium salts.

This depositional event was brought to an abrupt conclusion with a second major influx of the Windsor Sea into the Moncton Subbasin. Although not as widespread as the first, a sequence of shallow water evaporates (Clover Hill Formation) were deposited in the lower lying areas of the original depositional troughs in the Sussex area. Brines associated with this second transgression did not reach levels of concentration resulting in the deposition of potassium and magnesium salts. Instead, most deposits are sulphate dominated with localized occurrences of argillaceous halite. This phase of deposition gradually ended as continental sedimentation buried the entire Windsor evaporate sequence.