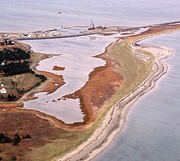 During a storm surge, periods of strong winds drive water towards the shoreline, significantly increasing the sea level. If the wind is blowing towards an estuary, the surge effect can be boosted even more, as the water is funnelled into the estuary area. The longer strong onshore winds persist, the greater the surge effect. Low air pressure literally sucks the sea surface upward, and this effect can be significant with intense low pressure systems. The worst surge impacts are caused when a surge due to wind and low pressure coincides with an unusually high tide. Sea levels can be raised over a metre above normal tide predictions. The impact of a storm surge may be offset if there is coastal sea ice present, although if the ice breaks up, it can add to the damaging effect of flooding and wave action. Storm surges can also be caused by tropical storms systems (hurricanes). The combination of high winds, heavy wave action and flooding during a storm surge can cause extensive damage to affected areas.