The exposition is one of North America’s leading seafood marketing events. It attracts more than 19,000 buyers and suppliers of fresh, frozen, packaged, and value-added seafood products, equipment and services. Participants travel from more than 100 countries to do business at the exposition.

“New Brunswick companies excelled with both the quality of their products and their exhibits at the Boston seafood show,” said Agriculture, Aquaculture and Fisheries Minister Ross Wetmore, who led the New Brunswick delegation. “This success helps drive our export sales and ultimately contributes to the gross domestic product.”

The fish and seafood industry is a major contributor to the economy. Provincial seafood exports remained relatively stable at $1.7 billion in 2018, with 79 per cent going to the markets in the United States.

While in Boston, Wetmore met with his counterparts from the other Atlantic provinces and Quebec to discuss topics of common interest.

“It is important to collaborate among provinces within our region and to strategize in priority areas of common interest in growing the aquaculture sector in eastern Canada,” said Wetmore.

The ministers also talked about the renewal of the Atlantic Provinces’ Memorandum of Understanding for the Development of the Aquaculture Sector.

Originally signed in 2008, the memorandum outlines areas of potential co-operation including research and development; fish health management and surveillance; attracting investment; and advocacy efforts with the federal government. 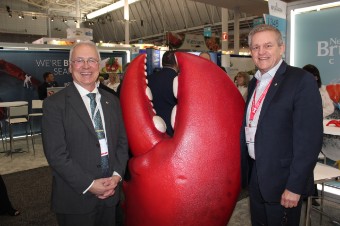