A silver and a bronze medal for Team New Brunswick

“I am happy they changed the course and pushed our event back half an hour,” said Kavanaugh. “It was like minus 43 degrees Celsius. Overall, it was pretty good.”

“It was so cold on the downhills,” said Toner.

Athletes were greeted with an extreme cold warning of minus 36 degrees Celsius and a wind chill of minus 48 degrees Celsius on Tuesday morning, forcing the cross-country skiing events to start later.

“My first fight was really hard,” said Savoie. “It was against the national champion and unfortunately I lost, but the frustration boosted me.”

Savoie’s and Kavanaugh’s medals are the first medals of the second week of competition. During the first week, Team New Brunswick earned gold in boxing, silver in gymnastics and bronze in short-track speedskating.

New Brunswick’s judo squad will return to the mats on Wednesday for more individual bouts.

Squash continues with team competition play on Wednesday. Badminton players return to the court on Thursday.

In archery, the second round of individual and mixed team qualifying events in recurve will take place on Wednesday.

Alpine skiers hit the slopes at Nakiska in the Kananaskis region for slalom events. The skiers return to Red Deer on Thursday to train for Saturday’s ski cross competition at nearby Canyon Ski Resort. 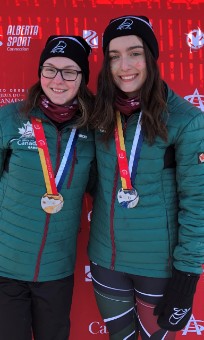