FREDERICTON (GNB) – Following the provincewide Sexual Crimes Review, a New Brunswick stakeholder group has been established to examine opportunities to improve the manner in which police forces respond to sexual crime cases.

The Department of Justice and Public Safety brought together stakeholders to discuss how police forces have traditionally responded to sexual crimes and identify the next steps in working on this issue. The meeting came after reviews into unfounded cases were submitted to the department by both RCMP and municipal and regional police forces.

“The provincial government is committed to ensuring confidence and integrity in the system for victims of sexual crimes,” said Justice and Public Safety Minister Denis Landry. “We must ensure that victims know that they are our priority. It is our responsibility to remove the barriers they face when reporting sexual violence and make sure they are supported throughout the reporting and criminal justice process. The Sexual Crimes Review and our stakeholder consultations constitute an important step forward in our path of improvement.”

The review marks a crucial first step in an important dialogue about improving how public institutions respond to victims of sexual violence. The government is working with police agencies, advocates, service providers as well as experts and specialists from across the country in order to ensure victims receive services in a manner that is not only professional and effective but also respectful and compassionate.

“The Unfounded series and police reviews of New Brunswick’s rates of unfounded cases are a jumping off point,” said Jennifer Richard, director of community development for the Fredericton Sexual Assault Centre. “It has allowed us to address the broader issues in how law enforcement and the justice system address sexual violence and interact with victims and survivors. Based on discussions to date, we are optimistic that the government is truly open to co-operating with key stakeholders.”

In response to the Globe and Mail’s February 2017 Report entitled Will the police believe you?, the Sexual Crimes Review was initiated after the Canadian Association of Chiefs of Police issued a statement requesting that all police services review practices around sexual assault investigations. All 10 police agencies in New Brunswick committed to review their sexual crime investigations for a five-year period. The minister of Justice and Public Safety also requested that the agencies involved submit their findings to government.

All RCMP divisions were ordered to further review unfounded sexual assault cases from 2016. J Division agreed to provide its mandated review of 2016 unfounded cases in New Brunswick to the department and to conduct an additional review of cases over a five-year period, from 2011 to 2015.

Through the review process it was clarified that “unfounded” is applied as a code in a number of instances where an investigation has determined no criminal code offence occurred. While this does include cases where false allegations were made, it also includes incidents that were reported by a third party that are later found to have been baseless and incidents that did occur but were not criminal in nature.

“As demonstrated by this report and stakeholder discussions, there are real opportunities to develop recommendations for better training, more oversight as well as collaboration and co-operation between government, police forces and partner agencies,” said Landry. “We look forward to continued collaboration in encouraging victims to report sexual violence and ensuring that our criminal justice system will respond to their report with respect.”

The information in these reports may be distressing to the public, particularly survivors of sexual violence and those who support them. Individuals who need assistance or support may contact the Fredericton Sexual Assault Centre help line at 506-454-0437. 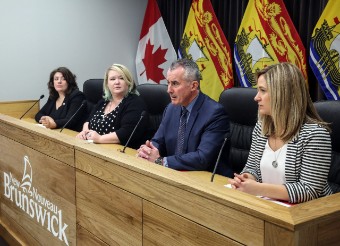