FREDERICTON (GNB) – The provincial government announced today it will establish a task force to examine workers’ compensation in New Brunswick and has asked the auditor general to conduct a value-for-money audit of WorkSafeNB.

"While employers and industry have expressed concerns about the rising premiums for businesses regarding workers’ compensation, we must also recognize that these funds are used to pay benefits to injured workers and that premiums remain relatively low compared to other provinces," said Post-Secondary Education, Training and Labour Minister Donald Arseneault. "This program belongs to workers and employers, so we must empower them to develop solutions."

The actions announced today include:

“We are very pleased that the government is taking these steps today,” said Joel Richardson, vice-president, New Brunswick and Prince Edward Island‎ divisions of the Canadian Manufacturers and Exporters association and chair of the Coalition of New Brunswick Employers. “We look forward to working with all key stakeholders to come up with solutions that benefit all sides.”

The task force will also examine WorkSafeNB’s current financial situation, the governing legislation and the overall objectives and effectiveness of the workers’ compensation system.

A discussion paper will be prepared to detail the current environment, facilitate discussion and seek input from stakeholders on how to address the situation and ensure the system appropriately addresses the needs and realities of current and future workplaces, while also striking the right balance between compensation for injured workers and the financial interests of employers.

“We are very pleased that the government is empowering stakeholders to ensure that the system is not only sustainable but also transparent and accountable,” said Gary Ritchie, president of the New Brunswick Building Trades Council. “We look forward to working with our business partners in this regard." 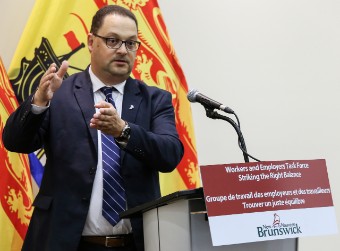