WINNIPEG (GNB) – The future of immigration was a main topic as Post-Secondary Education, Training and Labour Minister Donald Arseneault, whose responsibilities also include immigration, met with his federal, provincial and territorial counterparts in Winnipeg.

The ministers discussed how immigration can support strong, sustainable, long-term economic growth and innovation across the country while fostering a climate of diversity and inclusion.

“Immigrants play an essential role in growing New Brunswick’s economy by contributing needed skills to our workforce and enhancing our cultural diversity,” said Arseneault. “By working together, we can ensure newcomers are warmly welcomed, successfully integrated and have access to the resources they need to live and work here.”

Discussions also focused on the need for an expanded, more responsive immigration system that attracts and retains global talent to provide economic benefits to all jurisdictions. The ministers agreed that immigration, including the permanent residents Canada accepts each year, plays an important role in building a welcoming, strong country. They highlighted the importance of new approaches to federal settlement funding and working together to ensure the successful integration of newcomers, particularly refugees. In addition, the ministers discussed the importance of international qualifications recognition.

“Immigration is key to Canada’s economic growth and cultural diversity,” said federal Immigration, Refugees and Citizenship Minister John McCallum. “Provinces and territories are key partners in ensuring we do not take this positive view of immigration for granted. We continue to work together to ensure we achieve the significant economic and social benefits associated with successfully integrating newcomers, while, at the same time, meeting the government’s family reunification priority, as well as Canada’s commitments to humanitarian protection.”

The ministers also met with Economic Development Minister Francine Landry, who is also minister responsible for La Francophonie, to discuss francophone immigration. Landry took the opportunity to present the objectives of a ministerial forum on francophone immigration to be held in the spring of 2017 in New Brunswick. The forum will be a first initiative for establishing long-term co-operation among provincial, territorial and federal governments concerning francophone immigration.

The objective of the forum will be to determine avenues for co-operation among governments to promote francophone immigration outside Quebec. Participants will also establish strategies to expand the scope of government efforts and will support the implementation of federal strategies to achieve their objectives. 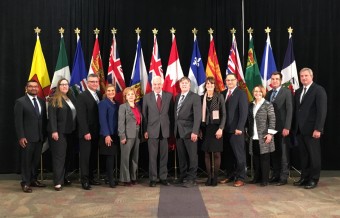