SAINT JOHN (GNB) – An agreement with Dalhousie Medicine New Brunswick, an English-language, distributed medical education program based in Saint John, has been renewed for five years.

“The renewal of this agreement will allow New Brunswick’s medical students to continue studying and training right here in their own province,” said Post-Secondary Education, Training and Labour Minister Donald Arseneault.

The renewal of the tripartite agreement with the provincial government, Dalhousie University and the University of New Brunswick allows Dalhousie Medicine New Brunswick to continue delivering its four-year undergraduate medical program in Saint John.

As part of the agreement, the provincial government provides operational funding to Dalhousie University to run the medical program, as well as funds to the University of New Brunswick to lease space at its Saint John campus to house the program and provide infrastructure, student support services and library facilities.

“The collaboration between the universities and Horizon Health Network, which provides training facilities and personnel, clearly demonstrates that we can all work together for the betterment of the health of New Brunswickers through the training of new doctors right here in our province,” said Health Minister Victor Boudreau.

The program admits 30 students each year. During the first two years, students conduct the majority of their studies in Saint John, followed by third-year clerkships that can take place in Fredericton, Miramichi, Moncton, Saint John or Waterville. Fourth-year electives take place in a wide range of locations throughout the province and beyond.

The original agreement was signed by all three parties in June 2008 with the charter class of 2014 welcomed in September 2010. 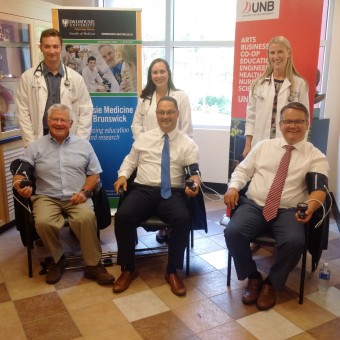