Office of the Premier
Opportunities NB

FREDERICTON (GNB) – IBM, a world leader in information technology and cybersecurity, is expanding its operations in New Brunswick, creating 100 new full-time jobs in the security division located in Fredericton over the next three years.

Gallant said New Brunswick is poised to leverage a strong foundation in information security and lead in this essential national priority. The province is already home to a natural cybersecurity cluster that dates back 25 years with the advancement of the broadband networks and establishment of Canada’s first faculty of computer science in Canada in 1989.

“This economic development investment will create a hub of information technology, security technology expertise and high-value jobs in New Brunswick,” said Dino Trevisani, president of IBM Canada. “Together, we are planting these economic development seeds to help transition New Brunswick into a knowledge-worker economy that can positively tackle huge challenges, such as the monumental growth of cybercrime, for the benefit of all Canadians and organizations worldwide.”

In 2011, IBM acquired Q1 Labs, whose QRadar Security Intelligence Platform was developed in partnership with the University of New Brunswick.

The acquisition served as a catalyst for IBM to form its security division, today a $2-billion business employing 7,500 researchers, developers and security experts in 36 locations worldwide.

IBM maintains a research development and customer support centre in Fredericton. It provides support for more than 5,000 customers around the globe.

The IBM Security QRadar analyzes data across an organization’s information technology infrastructure to identify potential security threats. It also serves as the “brains” of IBM’s 10 security operation centres around the globe. The technology is primarily designed, built, tested and supported out of New Brunswick. 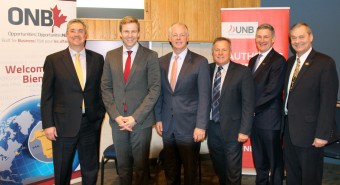