New Brunswick and Nova Scotia to co-operate on new office

HALIFAX, N.S. (GNB) – The provincial government will co-operate with Nova Scotia to create a new Joint Office of Regulatory and Service Effectiveness which will be responsible for promoting a modern, consistent and fair regulatory environment in both provinces.

The two provinces today signed a Memorandum of Understanding to confirm the intent to establish and jointly operate the office and commit to a shared vision for regulatory reform.

“Many New Brunswick companies do business in Nova Scotia and vice versa,” said Premier Brian Gallant. “By reducing and better aligning regulations in both provinces, we will help create the conditions for economic growth and job creation which is our government’s number one priority. New Brunswick and Nova Scotia may be among the smaller provinces in Canada, but by working together, we can achieve more for businesses and families in the Atlantic region.”

“We want to become one of the most competitive and prosperous business climates in Canada,” said Nova Scotia Premier Stephen McNeil. “To do that we have to remove obstacles and increase regulatory predictability so businesses are confident in making investments in our region.”

During the provincial government’s recent Strategic Program Review, business owners acknowledged that while some regulation is necessary, there is a need to reduce excessive paperwork, duplication and slow processes. In addition, the government is committed to working with the Atlantic Provinces to improve regional co-operation and reduce barriers for small businesses that are doing work across jurisdictions in the region.

Co-leads will be appointed by the premier of each province. The new office will have a three-year mandate to substantially reduce impediments to business growth and build a more positive business environment in New Brunswick and Nova Scotia. It will be responsible for:

The office will work towards identifying a number of other areas for co-operation between the two provinces such as health care and energy.

Premiers McNeil and Gallant agreed: “We have a shared vision of a new era of regional collaboration supporting economic renewal. A better regulatory environment is a tangible first step.” 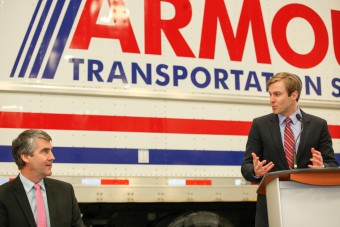