New members invested into the Order of New Brunswick for 2014

FREDERICTON (GNB) – Ten accomplished New Brunswickers were invested into the Order of New Brunswick today. The new members were inducted into the province's highest honour by the chancellor of the order, Lt.-Gov. Jocelyne Roy-Vienneau, at a ceremony at Government House in Fredericton.

“Today we celebrate 10 remarkable individuals and their extraordinary contribution to the social, cultural and economic well-being of New Brunswick,” said Premier Brian Gallant. “These men and women are diverse in their professions, regions and cultures but they share the common vision of making our province a better place to work, grow and prosper.”

The new members of the Order of New Brunswick are:

The Order of New Brunswick was first awarded in 2002 to recognize individual New Brunswickers who have demonstrated a high level of excellence and achievement in their lives, volunteer work and careers and who have made outstanding contributions to the social, cultural or economic development and well-being of the province, its communities and its residents.

“Each of these recipients represents excellence and embodies the true spirit of our province,” said Gallant. “We are fortunate and proud that these exceptional individuals have chosen to share their time, dedication and special qualities with all New Brunswickers.”

The 2014 inductees were presented with a medal representing the provincial flower and the shield of arms as well as a special ribbon in the same colours as the shield. Members of the order are entitled to use the initials ONB after their names. 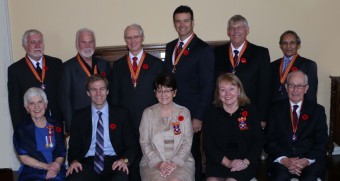