FREDERICTON (GNB) – The New Brunswick Drug Plan was introduced today in the legislative assembly. It will help New Brunswickers avoid catastrophic drug costs and ensure that prescription drug insurance is available to everyone.

"Providing affordable prescription drug coverage to New Brunswickers based on their ability to pay is the right thing to do," said Health Minister Hugh Flemming. "There are many people living in our province today who are facing high drug costs, including 70,000 families that have no drug coverage at all and that need this coverage. The New Brunswick Drug Plan will give New Brunswickers the peace of mind that they will have fair and affordable drug insurance when they need it, and I am pleased that our government was able to put this plan in place."

The plan, which will be administered by Medavie Blue Cross on behalf of the provincial government, will cover drugs listed on the New Brunswick Prescription Drug Program formulary. There will be no deductible, and coverage will not be denied because of age, gender or pre-existing medical conditions.

The plan will be implemented in two phases. Phase 1 will begin on May 1, 2014, when New Brunswickers with a valid Medicare card can choose to enrol in the plan. During this period, the premiums will be as follows:

Children 18 and younger will not pay premiums but a parent will have to be enrolled in the plan.  All plan members will be required to pay a 30-per-cent co-pay at the pharmacy up to $30 per prescription.

From May 1, 2014, to March 31, 2015, some New Brunswickers who have private drug plans but still incur high drug costs or need access to a drug covered under the new plan but not through their private plan may join the New Brunswick Drug Plan.

Phase 2 will begin on April 1, 2015, when all New Brunswickers will be required to have prescription drug insurance. Those not insured by a private plan will join the New Brunswick Drug Plan.

At this time, minimum coverage standards will come into effect, which means that all private group drug plans must be at least as comprehensive as the New Brunswick Drug Plan. This means:

Because of these provisions, after April 1, 2015, those who have group drug coverage available to them will not be eligible for the New Brunswick Drug Plan.

"We know that when people have access to the prescription drugs they need to manage chronic disease or to prevent or treat illness, they are healthier overall," said Flemming. "They take less time off work. They visit emergency rooms less often and are less likely to be hospitalized. This plan will contribute to lower health-care costs, which benefits everyone. It will allow us to spend that money in other ways that improve our economy and quality of life."

Flemming also announced a new consultation process to determine how business can contribute to the plan in the months to come. An implementation advisory committee, established to provide support and strategic advice, will lead this process.

"Members of the business community agreed to work with the provincial government to develop a prescription drug plan as part of Overcoming Poverty Together: The New Brunswick Economic and Social Inclusion Plan," said Flemming. "Some business stakeholder groups are telling us that, given the current challenging economic times, they are not able to contribute to this initiative at this moment. We understand their concerns; however, we must keep our commitment to establish a plan to help New Brunswickers afford the drugs they need. The advisory committee will work with businesses to examine ways they could contribute to the plan in a fair and economically viable manner in the future."

"The New Brunswick Drug Plan is the most important initiative since the introduction of Medicare, and we wanted to make sure we got it right," said Flemming. "It was important to take the time necessary to develop a solid drug plan for New Brunswickers that is comprehensive, sustainable and affordable. We have done that, and I thank everyone involved for their efforts."

More information about the New Brunswick Drug Plan is on the Department of Health website. 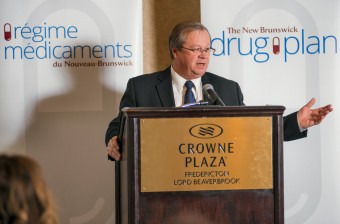