“I have known John for many years and he has done truly exceptional work in terms of advocacy and serving as a role model while supporting other individuals with physical disabilities,” said Randy Dickinson, chair of the New Brunswick Human Rights Commission. “The commission is proud to confer the 2013 Human Rights Award to this most deserving individual.”

Wood is no stranger to hard work and achievement. He has lived as a leader in the community, and his continued endeavours and exceptional efforts have served as an inspiration to many. Wood's determination in the face of adversity has provided support and guidance for families and communities alike. He has overcome difficult physical limitations, and has never let his disability stop him from putting others first.

Wood's motivation has always been to help support as many people with significant disabilities as possible. His foundation raises money through two main events, a dinner, auction and dance in November and a charity golf tournament in July. The money raised is divided between the chosen beneficiaries for their specific physical needs. The foundation turns Wood's passion for giving into promises of help by aiding people with physical disabilities in need of financial support. The foundation helps provide equipment, medications, travel or home renovations to residents throughout New Brunswick so they may lead a more enriched life.

“I am really thrilled to receive the Human Rights Award,” said Wood. “In my journey, there have been many roadblocks. Everyone has had them. Do not let them stop you, because the important thing is to figure out a way to work around them and never give up. Anything is possible.”

The award was established by the commission in 1988 to commemorate the 40th anniversary of the Universal Declaration of Human Rights. Each year, the award is given by the commission to an individual or group from New Brunswick that has shown outstanding effort, achievement and leadership on a volunteer basis in the promotion of human rights. 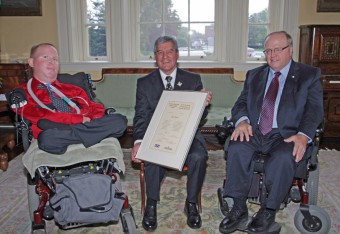