Speech from the throne highlights / second session of 57th legislature

FREDERICTON (CNB) – The 2011-12 speech from the throne sets out an agenda for the coming year that continues the work being done to change the culture of government.

This agenda includes targeted measures to invest in jobs; support healthy families and an enhanced quality of life; and ensure continuous government renewal.

Delivered by Lt.-Gov. Graydon Nicholas today, the speech opened the second session of the 57th legislature.

“This throne speech marks the beginning of the legislative year and the continuation of your government’s work to support a stronger economy and enhanced quality of life while living within our means,” said Nicholas. “The last few years have seen significant and difficult changes which have impacted the people of New Brunswick. It is no longer business as usual.”

The speech focuses on plans to transform government by building a robust economy; promoting healthy families; reducing poverty and enhancing education; and improving the culture of government to focus on core services, accountability through performance measures and continuous performance improvement.

“Today’s speech from the throne lays out a new foundation for rebuilding our province,” Premier David Alward said. “This foundation will be built on an economic development strategy that will move our workers from ‘hope wanted’ to ‘help wanted,’ with investments in job opportunities. It will be built by supporting families with renewed programs and services to help overcome poverty, increase access to primary health care and provide quality education for our next generation. This foundation will be supported by a government that is innovative, equitable and sustainable.”

Following are highlights of the speech from the throne:

Healthy families and an enhanced quality of life

“Earlier this year, your government began its first steps towards changing the culture of government,” Nicholas said. “The results of these efforts will include a legislative and budgetary agenda to be considered by this Assembly that will lay a new foundation for rebuilding New Brunswick.”

The complete text of the speech from the throne and highlights are online. 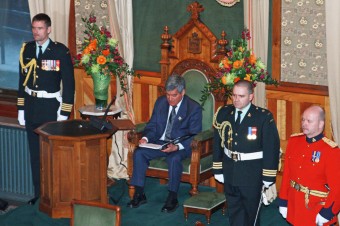