Finance Minister Blaine Higgs said the provincial government had been facing a $1-billion deficit if the spending trends of the past four years continued.

"Today's budget signifies a new direction: reversing our province's fiscal decline and restoring New Brunswickers' priorities and trust in government," said Higgs. "Our government has inherited a spending mess that cannot be fixed overnight. We are developing a plan to return to balanced budgets within our mandate and to encourage a growing, vibrant economy."

The $8.091-billion expenditure budget for 2011-12 represents a decline of 1.6 per cent from revised 2010-11 estimates. Demand and cost pressures have been offset by managing spending and implementing program restraint and efficiencies.

"This budget represents a first step toward a more balanced approach for New Brunswick," said Higgs. "We were able to make significant strides in this budget without increasing income taxes for middle- and lower-income earners; and to take New Brunswick in a new direction thanks to the input of our residents and civil servants. Truly, we are all in this together."

Higgs noted that the budget reflects the responsible measures that provincial government has taken to trim the deficit.

The projected 2011-12 deficit of $448.8 million represents a significant reduction from the $1-billion estimate of last November and consists of the following:

●    about $220 million in spending restraint and program efficiencies;
●    more than $100 million in revenue measures, including changes to income taxes, tobacco and fuel taxes and net income from the NB Liquor Corporation; and
●    an improvement in revenue projections in the order of $220 million related to the projected net income of the New Brunswick Electric Finance Corporation, improved economic data and new federal estimates.

Higgs emphasized the public's input and assistance in helping to formulate the 2011-12 budget.

A record number of New Brunswickers participated in this year's pre-budget consultations. Close to 3,000 submissions were received through the online questionnaire. About 1,500 participated via e-mail to Premier David Alward. More than 1,200 people and 260 stakeholders took part in the 20 public and stakeholder meetings held throughout New Brunswick. Additionally, hundreds of e-mailed suggestions and written submissions were sent to the premier and ministers.

Some of the main items submitted by New Brunswickers were:

●    health and senior care, education, economic development and job creation should continue to be key priorities;
●    people want a balanced approach: spending should be reduced in concert with revenue increases to address the serious fiscal challenge;
●    spending should be managed by reducing the overall size of government, streamlining administration, controlling wages and salaries, regionalizing services, avoiding unnecessary duplication and reducing grants and loans to business;
●    revenue from sources such as tobacco and alcohol sales should be increased;
●    highway tolls on major highways should be examined;
●    all public sector pension benefit packages should be reviewed, including those of MLAs;
●    the provincial government should return to a balanced budget in four years.

The 2011-12 budget outlines a series of ways the provincial government will make strategic investments while at the same time taking new efficiency measures to rein in spending and return to balanced budgets.

Investments and initiatives include:

●    establishing the $30-million Northern New Brunswick Job Creation Fund and the $7.1-million Miramichi Regional Job Creation Fund, which consists of both contributions and loans;
●    initial funding for a mental health action plan to address the recommendations of the McKee Report;
●    initial funding for a comprehensive diabetes strategy focusing on the prevention, detection and management of diabetes, including funding for insulin pumps and other essential supplies;
●    initial funding for the establishment and administration of a patient assistance fund to provide support to persons with multiple sclerosis;
●    continued implementation of the province’s poverty reduction plan;
●    working with home-care agencies and special-care homes to ensure that home care workers receive an increase in their hourly wages;
●    increasing the operating grant to public universities by two per cent and increasing targeted bursaries to students from lower-income families;
●    making significant investments to support positive outcomes in early childhood development, student achievement and inclusion practices;
●    creating a teaching supplies fund that will allow teachers to buy educational items for their classrooms; and
●    increasing funding for school supplies for low-income families to $100 from $50.

The 2011-12 budget includes a number of initiatives that will reduce spending growth by some $220 million. Examples include:

●    $15 million in savings across government from implementing the ideas put forward during the pre-budget consultations, such as eliminating positions that are not filled, reducing meeting and travel expenses, eliminating duplication and overlap in government operations; consolidating office space and reducing energy use; and reducing spending on smartphones and cell phones;
●    $20.6 million in reduced spending on various initiatives within the Regional Development Corporation;
●    $17.6 million in savings through expenditure reductions in school district administration and operations;
●    $15 million in savings through general expenditure reductions in the regional health authorities and $8 million in savings from purchasing and other efficiencies in non-clinical services;
●    $1.6 million in savings by reinstating the parental contribution for student financial assistance;
●    $1.5 million in reduced overtime spending through improved work planning and scheduling of tasks in the Department of Transportation; and
●    $1 million through a structural review of Communications New Brunswick to improve efficiency in government marketing and communications.

Other measures that will be put in place in 2011-12 to manage spending growth and improve efficiency include:

●    reducing the number of deputy minister and assistant deputy minister positions by 10 per cent;
●    developing a generic drug pricing policy for the Prescription Drug Program in consultation with pharmacy and other stakeholders;
●    looking at improved procurement methods and opportunities;
●    eliminating funding for the New Brunswick Provincial Capital Commission; and
●    eliminating overlap by transferring the functions of the Community Non-Profit Organizations Secretariat to the Department of Social Development; and the Advisory Council for the Status of Women to the Women's Issues Branch of the Executive Council Office.

The provincial government will continue wage restraint measures by freezing MLA salaries for a third consecutive year. Other wage restraint measures for 2011-12 will include the continuation of the hiring freeze for civil service positions and a one-year suspension of salary progression increases along with performance pay for qualified management and non-unionized employees across the provincial government.

"I want to assure employees that the provincial government is very well aware of the excellent services they provide to New Brunswickers, but we must all share in the corrective actions that need to be taken to address our unprecedented fiscal challenge," Higgs said.

The provincial government re-affirmed its commitment not to reduce the general corporate tax rate below 10 per cent and also kept its commitment to begin lowering the small business tax by reducing it to 4.5 per cent from five per cent.

The provincial government announced it will hold the top marginal tax rate on high income earners in the current top bracket at 2010 levels of 14.3 per cent. This measure applies to about 11,000 New Brunswickers who earn more than $120,796. The provincial government will delay additional personal income tax reductions that had been scheduled for 2012 – meaning, all tax rates for 2012 will remain at the 2011 levels.

The provincial tax on gasoline will increase by 2.9 cents a litre and diesel fuel by 2.3 cents a litre. This is estimated to result in an additional $44 million in revenue. Even with the increase, New Brunswick continues to have the lowest gasoline tax in Atlantic Canada and the third lowest of all provinces. 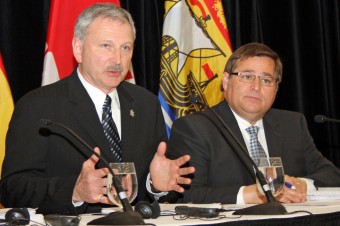