FREDERICTON (GNB) – The provincial government has proclaimed May as Sexual Assault Awareness Month and is investing $1 million annually in community-based sexual violence services. The funding will be distributed among five communities around the province.

According to Statistics Canada, there were 610 sexual assault cases reported to police in New Brunswick in 2020. The actual number of assaults is likely higher, as the agency recognizes that such cases are significantly underreported.

“Sexual violence toward anyone has a devastating impact, not only on victims and the people who love them, but on the sense of security we all feel,” said Tourism, Heritage and Culture Minister Tammy Scott-Wallace, who is also the minister responsible for women’s equality. “As a community, we have a responsibility to dispel myths, challenge stereotypes and create a respectful environment for everyone to thrive in safety.”

The five areas receiving funding are Fredericton, Moncton, the Acadian Peninsula, Edmundston and Saint John. Each region has agencies, with infrastructure in place, ready to deliver co-ordination and counselling services. The following agencies will each receive $200,000 to provide services:

The need for these services is identified in Preventing and Responding to Sexual Violence in New Brunswick: A Framework for Action.

“Joining communities with the government ignites a collective voice that can speak loudly against the harm of sexual violence,” said Scott-Wallace. “We have the collective power to prevent sexual violence and support survivors. Let’s use it.” 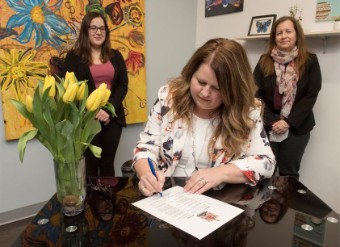