FREDERICTON (GNB) – A documentary entitled The Silent Witness Journey: Two Women’s Stories was launched today in Fredericton during a symposium on intimate partner violence and homicide. The video chronicles the creation of Silent Witness silhouettes of two First Nation women who died from gender-based violence.

The silhouettes commemorate the lives of Rowena Sharpe and Geraldine Paul, both from St. Mary’s First Nation, who were murdered by their partners in 2012 and 1981, respectively.

“We all have a role to play when it comes to addressing violence in our communities,” said Service New Brunswick Minister Sherry Wilson, who is also the minister responsible for women’s equality. “The release of this moving video provides an opportunity for public education and awareness, which is necessary when it comes to addressing and eliminating violence in our communities.”

The Silent Witness Project is an exhibit of life-sized red silhouettes representing New Brunswick women who have died as a result of domestic violence. The goals of the project are to: remember women killed by a current or former spouse or partner; create awareness of the risk factors for intimate partner violence and domestic homicide; and promote action to end violence against women.

The documentary, created by RayneMaker Productions, focuses on the journey the families and community took to create the silhouettes. The video will be used to raise awareness of domestic and intimate partner violence and homicide, and missing and murdered aboriginal women and girls.

The project was led by the Fergusson Foundation in partnership with the Women’s Equality Branch, the Department of Public Safety, the Silent Witness Project, St. Mary’s First Nation and the families of Sharpe and Paul.

The provincial government, through the Women’s Equality Branch and the Department of Public Safety, contributed $20,000 to the foundation to undertake the project.

“We are all in this together because we cannot do it alone,” said Public Safety Minister Carl Urquhart. “Initiatives like this one increase awareness and help us to learn from one another and to work together to find a solution.”

More than 175 people took part in the symposium, which was organized by the Fergusson Foundation, the Silent Witness Project and the provincial government. It was also streamed live to a national audience, including the Muriel McQueen Fergusson Centre for Family Violence Research and Family Information Liaison Units.

“Today's video launch and symposium is a great example of collaboration,” said Fergusson Foundation president Norma Dubé. “Creating opportunities to come together, learn from experts and participate in open dialogue is a key element of increasing awareness and understanding of the complexity of family violence and the role we all have to play in preventing and eliminating it.” 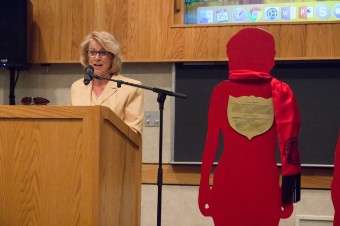