LAMÈQUE (GNB) – The provincial government has recognized the Véloroute de la Péninsule acadienne as one of the 11 Signature Trails highlighted in the recently announced Trails Action Plan.

“The provincial government recognizes the importance of developing quality trails in the province,” said Agriculture, Mines and Rural Affairs Minister Wilfred Roussel. “Getting the Signature Trail status will raise the Véloroute de la Péninsule acadienne’s profile as a destination of choice while contributing to active and healthy living for people of the region and the province.”

Signature Trails are an important part of the Trails Action Plan, a $15.78 million investment in the province’s trails network. Eleven Signature Trails have been designated for development, from signage upgrades to infrastructure to long-term management plans.

Signature Trails are major regional tourism attractions. They encompass distinctive landscapes and vistas, from the Appalachian Mountain Range and Acadian forests to city waterfronts and coastlines. The Trails Action Plan is intended to elevate the network of over 20,000 km of developed trails by improving accessibility, safety and overall user experience.

“Getting the Signature Trail designation for the Véloroute de la Péninsule acadienne will help us take the final steps toward offering a high-quality ecotourism product to the local population and to visitors from elsewhere in the province, the country or from other countries,” said Ernest Ferguson, president of the Véloroute de la Péninsule acadienne.

The New Brunswick Tourism Growth Strategy will invest $100 million in tourism over the next eight years, with a goal of growing tourism-related GDP to $2 billion by 2025. Tourism visitor spending is estimated at $1.3 billion, making it the third-largest service sector in the province. 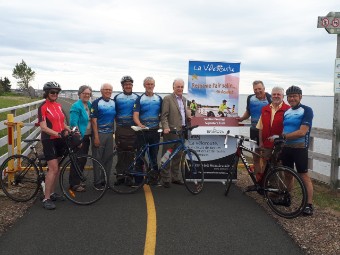