“Team NB can be proud of its performance at the 2013 Canada Summer Games,” said Stephane Hachey, New Brunswick’s chef-de-mission. "Our athletes were up to the challenge and responded with 16 medals matching our second-best showing.”

“Being named Team NB’s flag bearer is pretty exciting,” Lalonde, who won gold by setting a new provincial, national and Canada Games record in the 2.000-metre steeplechase, and a bronze in the 1,500-metres on the track.

“This past week has been awesome, and I could not have done it without the support of my parents, teammates, friends and province,” she said. 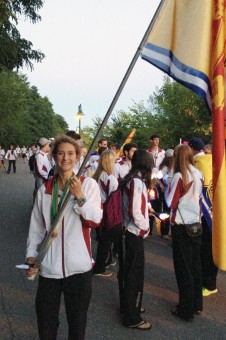