Justice and Public Safety
Office of the Premier

FREDERICTON (GNB) – Today marked the official launch of a road safety campaign encouraging drivers and cyclists to share the road. Premier Brian Gallant presented the new campaign to an audience of cyclists outside the legislature.

“Your government is committed to making our roads and highways safer for drivers, cyclists and their families,” said Gallant. “The theme We’re All Traffic is a reminder to New Brunswickers that each one of us who uses our roads and highways also has a responsibility to ensure each other’s safety. Regardless of whether you drive a car or ride a bike, you have a responsibility to follow the rules of the road for your safety and the safety of others.”

The campaign is part of a commitment to develop an education campaign focused on sharing the road. It also coincides with An Act Respecting Ellen’s Law receiving royal assent in the legislative assembly.

“This campaign will help educate all New Brunswickers about the importance of sharing the road and being considerate of everyone’s safety. We will be reaching out to all New Brunswickers with this message in the coming weeks and months,” said Justice and Public Safety Minister Denis Landry. “We continue to work closely with our stakeholders as we move forward with public education, as well as the development of a comprehensive bicycle strategy.”

“This amendment to the Motor Vehicle Act is a fitting tribute to the memory of Ellen Watters,” said Velo NB member Sheila Cameron. “We are confident the one-metre rule will help make our streets and roads safer for cyclists in New Brunswick.”

The amendment to the Motor Vehicle Act, commonly referred to as “Ellen’s law,” stipulates that a driver of a motor vehicle shall not pass a bicycle travelling in the same direction unless there is sufficient space to do so safely and the driver leaves at least one metre of open space between the vehicle and the bicycle. The amendment also allows motorists to cross the centre line while passing bicycles, when it is safe to do so.

Failure to provide the one-metre space will be an offence, resulting in a fine of $172.50 and the loss of three demerit points. This penalty is consistent with similar offences under the act with respect to safely passing another vehicle, including motorcycles.

New Brunswick joins provinces such as Ontario and Quebec in instituting a one-metre-space rule for cyclists and motor vehicle drivers.

“We know that legislation and education are the best tools to keep our streets, roads and highways safer,” said government house leader Rick Doucet. “This is a fitting legacy to the life of Ellen Watters, who was a strong voice for cyclist safety. Let us honour her memory by working together to keep New Brunswick’s streets, roads and highways safe.”

More information about driver and cyclist safety is available online. 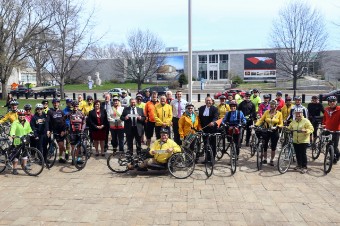