FREDERICTON (GNB) – Premier Blaine Higgs delivered his annual state of the province address today, highlighting collaborative projects and investments that have contributed to New Brunswick’s growth over the past year.

“Despite a very challenging environment, our private sector continues to seize growth opportunities,” Higgs said. “Who would have thought that amidst a global pandemic I would be sharing highlights of well over $200 million in new private investment projects.”

Higgs said those projects include new capital expansions, equipment for automation and productivity, buildings and production lines. Since April 1, 2020, he said clients of Opportunities New Brunswick have worked toward creating upward of 1,700 new jobs, translating into more than $219 million in new provincial GDP contributions.

He also noted real estate sales in the province have increased by 15 per cent for the year and new apartment and condominium construction is at an all-time high. He said New Brunswick’s population is growing, with Moncton ranked seventh amongst all census metropolitan areas in Canada for population growth.

Higgs announced that, based on feedback about affordable housing and rent increases, his government will conduct a 90-day review of the rental situation in New Brunswick. This will involve evaluating the market, vacancy rates, rental fees and trends as well as the overall impact of COVID-19.

Higgs said the government has made steady progress toward its strategy for small modular nuclear reactors. During his address, he announced the government will invest $20 million in ARC Clean Energy technology.

Higgs noted that, while the province’s economy is still recovering from the pandemic, New Brunswick is consistently leading the country in terms of job recovery. While managing the impact of the pandemic, he said the government has focused on advancing key strategies to help businesses compete, including the New Brunswick First Procurement Strategy and the Local Food and Beverages Strategy. Higgs said Opportunities New Brunswick is also helping businesses tap into global markets as part of its new mandate.

“We are not just recovering as we work through the pandemic,” he said. “We are truly reinventing New Brunswick. Looking to the future, our province will only grow stronger as we move beyond COVID-19.”

Higgs said that the province continues to face challenges, including local governance issues, which will be addressed through a consultation process over the coming months. He said increasing demands on the health-care system are still a major issue, and noted the government remains focused on reducing wait times and exploring opportunities to centralize some services, leverage technology and recruit specialists. Higgs said new federal regulations on the oil and gas sector are also a serious concern.

“We all recognize we must transition to a greener economy, but we must do so in a methodical way,” he said. “We will continue to work together to balance our economic and environmental sustainability.” 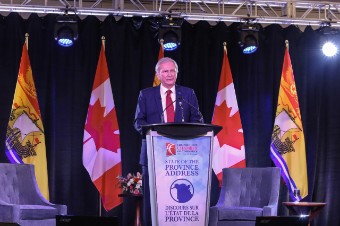