Tourism, Heritage and Culture
Office of the Premier

EDMUNDSTON (GNB) – The provincial government is investing almost $650,000 in the New Brunswick Botanical Garden as part of an increased focus on the tourism sector.

“Tourism is a major component of the government’s economic vision,” said Premier Brian Gallant. “This investment will ensure that the beautiful New Brunswick Botanical Garden continues to welcome and attract visitors to the Madawaska region and the province.”

As part of the government’s commitment to growing the tourism sector, investments in capital maintenance for provincial parks and attractions are doubling to $2 million for the 2017-18 fiscal year compared to the $1 million made available in 2016-17.

The investment in the New Brunswick Botanical Garden includes:

The site features thematic gardens, including unique medical plants and an aromatic herb garden where herbalism workshops are offered. There are also mosaicultures, or designs made from flower beds, to help visitors discover aspects of local history and culture.

More than 23,000 people have visited the garden this year, travelling from across New Brunswick, as well as places such as Quebec, Ontario and the eastern United States.

“The garden provides a wonderful experience for both visitors and residents of the province, and is important to the region and to the tourism industry,” said Economic Development Minister Francine Landry. “We are proud to support the botanical garden to improve its facilities.”

The tourism industry is an important job creator, employing more than 42,000 people in New Brunswick, and it contributes more than $520 million annually to the provincial GDP. For every public dollar invested in promoting New Brunswick as a tourism destination, there is a return of $3.19 to the province. The budget for the Department of Tourism, Heritage and Culture increased by 17.6 per cent this year. In addition, a capital investment of $75 million will be made over the next three years for upgrades to assets of cultural and historic significance. 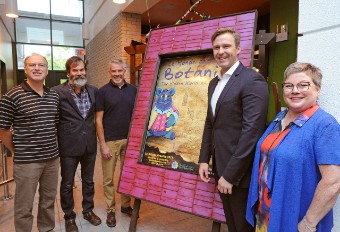