FREDERICTON (GNB) – Ten distinguished individuals were invested into the Order of New Brunswick, including one posthumously, by the chancellor of the order, Lt.-Gov. Brenda L. Murphy, at a ceremony at Government House in Fredericton.

“It is with great pleasure that we celebrate 10 outstanding individuals who have dedicated their lives to making a difference for the people of New Brunswick,” said Premier Blaine Higgs. “By awarding them the province's highest civilian honour, we are recognizing the effort, generosity, skill, and talent they have used for the benefit of others and their province. They all deserve our utmost respect and admiration."

Jean-Claude Basque, from Moncton, for his outstanding commitment and work related to defending workers' rights and social justice for all New Brunswick residents.

Cecile Cassista, from Riverview, for her outstanding commitment to advocacy on behalf of the province's seniors, so they can live with greater respect and dignity, and for her strong leadership in serving the residents of her community.

Randy Dickinson, from Fredericton, for his dedication to creating a province where all residents can be truly equal, and for working tirelessly to improve the quality of life for people with different types of disabilities and to increase awareness of issues affecting them.

Penny Ericson, from Fredericton, for her outstanding achievements and leadership in improving the health, social and cultural well-being of her community and province.

Lucinda Flemer, from Saint Andrews, for her profound impact on the residents of her community and on the lives of many other New Brunswickers through her vision, her endless creativity, and her generosity.

Sandra L. Irving, from Saint John, for her outstanding leadership, advocacy for educational and health-care institutions, and for her commitment to the betterment of her community and her province.

Larry Nelson, from Moncton, for his service and dedication to his community and for his tremendous economic, social and cultural contribution to New Brunswick.

Valois Robichaud, from Baie du Petit Pokemouche, for his many accomplishments as an educator and humanist committed to serving others, and for his support of people who are ill and at the end of life.

Robert (Bobby) Sylliboy, from Esgenoôpetitj First Nation, for his incredible work and dedication as a coach and champion for youth in his community of Esgenoôpetitj, and for his exceptional mentorship and excellence in volunteerism.

The inductees were presented with the Order of New Brunswick medal. Members of the order are entitled to use the initials O.N.B. after their names.

The Order of New Brunswick was established in 2000 to recognize individuals who have demonstrated a high level of excellence and achievement in their field. Since 2002, more than 200 accomplished individuals have been invested with the order for their dedication and service to the province, its people and communities. 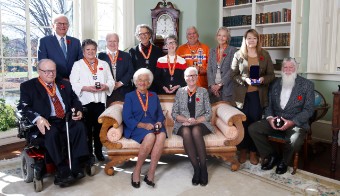