Premier meets with special envoy on trade and softwood lumber

“Your government understands how important our trading relationship is with the United States for the New Brunswick economy,” said Gallant. “Robust trade between the United States and Canada creates jobs for both countries. We are pleased to have Ambassador Wilkins working on behalf of New Brunswickers in Washington, advancing our interests on softwood lumber, trade, investment and economic development.”

In his first 15 months as ambassador, Wilkins helped resolve a softwood lumber dispute, with the support of most of the Canadian lumber industry. His current role and responsibilities include: to assist with lobbying efforts on the softwood lumber file, to promote New Brunswick business, trade and investment opportunities with the United States, and to provide New Brunswick with strategic advice on issues that could have an impact on the province's interests.

“Forestry is an important part of our economy, and provides jobs in communities across the province,” said Mike Légère, executive director of Forest NB. “Our industry is working with our partners to resolve the softwood lumber challenge. We are pleased with the discussion that took place today with Ambassador Wilkins.”

“Today we were fortunate to meet and talk about the opportunities that exist for trade with our neighbours”, said Treasury Board President Roger Melanson, who is also the minister responsible for trade policy. “We had productive, informative discussions and it is clear that New Brunswick has much to offer. I look forward to working with Ambassador Wilkins to promote New Brunswick and to advocate for our great province across the border.”

Deputy Premier Stephen Horsman recently returned from China as part of an economic and advocacy initiative where he promoted New Brunswick’s softwood lumber industry in an effort to help businesses diversify. Gallant and other government representatives have been lobbying the federal and American governments in support of New Brunswick’s exclusion since 2014. The provincial government has made submissions to the United States Department of Commerce, calling for an open, undistorted market for New Brunswick lumber. Melanson was in Boston last month, discussing the matter with officials of the Massachusetts state government, and did the same during a recent advocacy mission to Augusta, Maine. 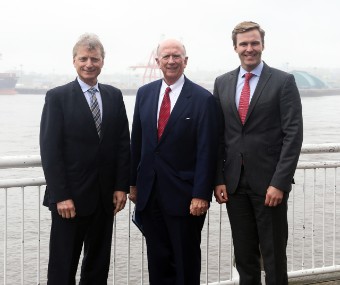