August 12, 2022 update – single lane was open temporarily to allow for grading. Bridge is closed again, and traffic detoured, until project is complete. 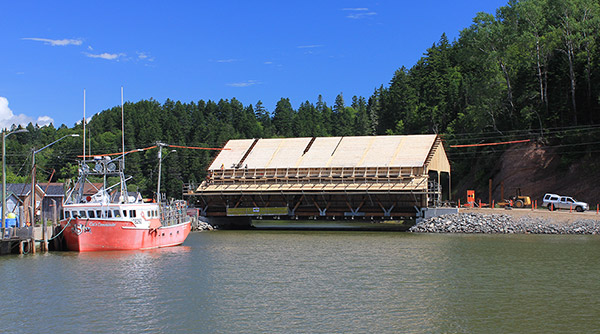 The Vaughan Creek Covered Bridge is a link between the Fundy Trail Parkway and St. Martins and points east.

Constructed in 1935, the present bridge is one of New Brunswick’s 58 historic single lane covered bridges. Due to advanced deterioration it has reached the end of its service life and was forced to be closed in June 2017. A temporary single lane modular bridge was installed to maintain access through to the sea caves and the Fundy Trail. The Vaughan Creek Covered Bridge Replacement Project will construct a new wooden two-lane covered bridge on the same alignment as the existing bridge. The new bridge will be designed to accommodate larger vehicles, 2 lanes of traffic and have a pedestrian passage way.

The new bridge will provide the residents of St. Martins and visitors to the community, with an improved transportation link while preserving an important piece of the region’s heritage.

Construction on the new bridge will begin in the fall of 2021 and be open to traffic at the end of the summer of 2022.

The front façade of the existing Vaughan Creek Covered Bridge will be preserved in partnership with the Village of St. Martins.

The modular bridge will remain in place during construction and be removed once the new covered bridge is built.

Safety requirements are in effect for operators of private trucks working on provincial highway projects and contracts.