Several indigenous wireworm species are recognized as major or minor pests of potatoes. 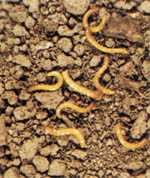 Wireworms are the larval stage of click beetles. The adult beetles range in length from 10 to 16 mm, are hard bodied and brown or black. All wireworm larvae are similar in outward appearance. Newly hatched wireworms have three pairs of thoracic legs, are white and measure about 1.5 mm in length. Later, they become yellow or light brown, with a shiny smooth exterior. The larval body is elongate and nearly cylindrical, but somewhat flattened beneath and, at maturity, it measures up to 3 cm long.

Depending on the species, the life-cycle ranges from 3 to 6 years, with 2 to 5 years being spent as actively feeding larvae. In chronically infested areas, all larval instars may be present at the same time during the growing season. Typically, mature larvae pupate in earthen cells in the soil in late summer or early fall and within three weeks develop into adults that overwinter. The adults emerge from the soil the following spring or summer, and mate, after which the females burrow 2.5 to 15 cm into the ground, where they lay 50 to 300 eggs. The females are poor fliers, so the spread of infestations from field to field is slow.

The egg stage lasts 3 to 4 weeks and the young larvae will feed on plant residue or the roots of many crops and weeds. Larvae move upward or downward in the soil, responding to moisture, temperature and the presence of food. In the spring, larvae move upward when the soil temperature near the surface reaches 10EC. In potato fields, they will spend much of the growing season in the upper 10 cm of soil. Generally, they overwinter deep in the soil to avoid freezing. This cycle is repeated until the wireworms are mature.

In the spring, wireworms tunnel into potato seed pieces and the developing roots and shoots. With heavy infestations, the potato crop may be weakened and spotty. Later in the growing season, wireworms feed on the developing tubers, producing tunnels 3 mm in diameter and 4 cm deep. These holes become lined with periderm and subsequent tuber growth may be severely distorted.

Monitoring - If a wireworm problem is suspected, the field should be monitored, using the following procedures. The simplest way to determine the presence or absence of wireworms is to follow the plow in early spring or fall, when soil temperatures are above 10EC and wireworms are near the surface. After plowing and before planting, baits of whole wheat flour can be used to determine the level of infestation more accurately. This is done by placing about 30 grams of flour at a depth of 10 cm in the soil, using an ordinary corn planter or a shovel and marking each bait station with a stake. For reliable results, 30 to 50 bait stations should be used per hectare. After 3 or 4 days, the baits can be uncovered and the wireworms counted. If an average of one or more wireworms is encountered per station, damage to potatoes can be severe. Baiting is effective in the warmer spring and summer months, but not if the soil contains a lot of plant residue or if the weather is cold, wet or very dry.

Cultural Practices - Where wireworm population levels are high, careful consideration must be given to proper crop rotation. Wireworms thrive in sod, in red and sweet clover, in small grains such as barley and wheat and in truck crops, all of which should therefore be avoided in rotations with potatoes. Where economic wireworm populations occur, growers should rotate with alfalfa or corn and continue this practice for at least three years before planting potatoes.

Chemical Control - A limited number of chemicals are directed against the larvae. For best control, if potatoes must be planted in an infested area, granular insecticides may be broadcast and worked into the soil to a depth of 12 to 15 cm before planting, or applied as a band treatment in the furrow at planting.