The Queen Elizabeth II Platinum Jubilee Medal (New Brunswick) was created to mark the 70th anniversary of Her Majesty’s Accession to the Throne as Queen of Canada. The medal honours The Queen and her lifelong service to Canada, as well as those residents of New Brunswick who, like Her Majesty, have been exemplary in their service to others.

The program will be administered by the Office of Protocol of New Brunswick, with trusted partners including but not limited to Members of the Legislative Assembly (MLAs), Members of Parliament (MPs), Senators, various governmental departments, Indigenous leaders, the RCMP, and the Canadian Armed Forces.

A total of 3000 medals will be awarded by partners who will each be allocated a select number of medals for which to nominate the most deserving individuals in their constituency, organization or field of activity. One third of the total medals are specifically intended for those who have made outstanding contributions to the province’s COVID-19 pandemic response. The awarding of medals will occur throughout the Julbilee year.

To be eligible for this award, nominees must:

A specific focus should be placed on those individuals who have:

The following must also be considered before submitting a nomination:

The medal is silver in colour, 32mm in diameter with a ring suspension.

The obverse (front) depicts a crowned image of the Sovereign, in whose name the medal is bestowed. The design was previously used for the 2012 Diamond Jubilee Medal, which was designed by the Canadian Heraldic Authority.

The reverse depicts the Queen’s Royal Cypher, which consists of a Royal Crown surmounting the letters EIIR (Elizabeth II Regina, the latter word meaning Queen in Latin), with the dates of The Queen’s Reign, 1952 and 2022, on either side at the top. The provincial shield of arms is in the centre, on either side of which are violets (the provincial flower). The motto VIVAT REGINA (“Long live The Queen!”), appears at the base. 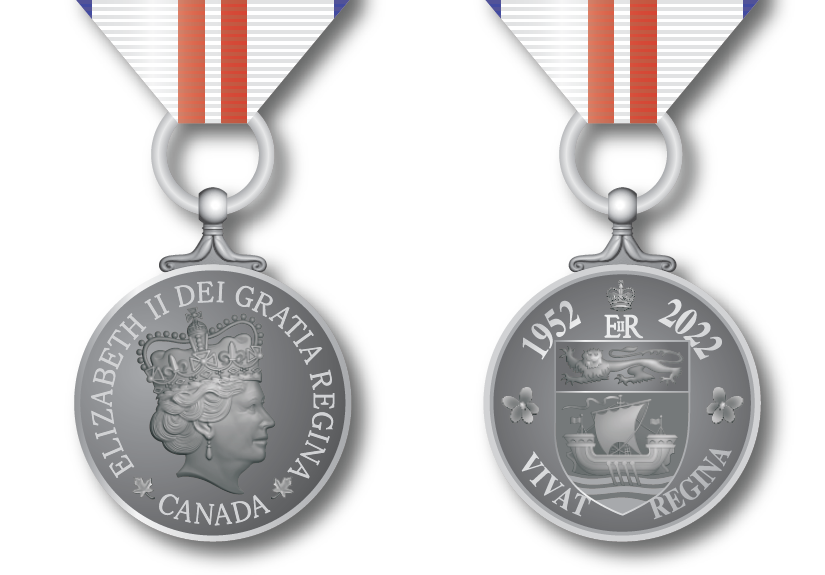 Why is the Queen Elizabeth II Platinum Jubilee Medal (New Brunswick) being created?

Why are commemorative medals established?

Commemorative medals are established to mark special anniversaries or occasions. They are typically awarded to recognize contributions made by Canadians from a broad spectrum of society.

Provinces have previously created commemorative medals, namely the Alberta Centennial Medal and the Saskatchewan Centennial Medal (both in 2005), which were officially recognized by the Government of Canada and authorized for wear with other official honours.

Who will administer the program?

Is New Brunswick the only jurisdiction that will have a Platinum Jubilee Medal program?

The United Kingdom has already begun to roll out their Platinum Jubilee Medal program and The Queen's Caribbean Realms have also instituted a medal program for 2022.

The New Brunswick Office of Protocol has been working closely with several other provinces to establish Jubilee Medal programs. To date, Alberta (7,000 medals), Saskatchewan (7,000 medals) Nova Scotia (5,000 medals) and Manitoba (1000 medals) have officially announced their programs.

How was the number of 3,000 recipients chosen?

It was decided to proceed with 3,000 recipients based on the number of New Brunswickers recognized by the 2012 Diamond Jubilee Medal program. At that time, 2,300 residents of New Brunswick were awarded medals. The number 3,000 accounts for population growth and also the desire to recognize a large number of people who have made significant contributions throughout the COVID-19 pandemic.

Who can submit nominations?

Will people from outside New Brunswick be able to receive the medal?

How was the medal approved?

Where will this medal fit with my other medals?

Permission is being sought from the Government of Canada to have the medal listed in the Order of Precedence with the other commemorative medals of the Canadian Honours System. It is expected that the medal will be worn after The Queen’s Diamond Jubilee Medal (2012) and before the RCMP Long Service Medal, the Canadian Forces’ Decoration (C.D.) and the Exemplary Service Medals. Other provincial commemorative medals, such as the 2005 Alberta Centennial Medal and the 2005 Saskatchewan Centennial, have been included in the Order of Precedence so there is a solid precedent.

The complete list of precedence for orders, decorations and medals is available online at www.gg.ca/en/order-precedence

What are the criteria for the selection of recipients?

To be eligible for the medal, recipients must:

In addition, a specific focus will be placed on those residents of New Brunswick who have:

Can the medal be awarded posthumously?

To be eligible, the candidate must have been alive on February 6, 2022, the date of the 70th anniversary of The Queen’s accession to the Throne.

Who will be selecting the recipients?

Each partner in the program will have the opportunity to nominate the most deserving recipients from their riding, organization or field of activity. This is an ideal occasion for them to recognize, in a tangible way, those who they depend upon to fulfil their mission. They will be trusted to conduct a  fair and transparent nomination process that can withstand public scrutiny. Guidance will be provided to assist partners in this aspect of the program as the respect and credibility of the program will depend on the standard, quality and representativeness of those selected.

How is fairness in the selection process ensured?

The criteria and the list of recipients will be made public. Partners will be provided with guidelines to assist them in the selection process and to promote transparency, fairness and equitable representation.

Will some people receive the medal automatically?

New Brunswickers who have already demonstrated their contribution to the province, such as some members of the provincial Table of Precedence as well as recipients of the Order of Canada and Order of New Brunswick will receive the medal.

Once selected, when will recipients be announced and how will they receive their medals?

Most medals will be officially presented to recipients at presentation ceremonies, which will be organized by program partners. The Office of the Lieutenant Governor in partnership with the Office of Protocol will also be holding medal presentation ceremonies throughout the year. A list of final recipients will be published on the Government of New Brunswick website at the close of the program.

When is the deadline for nominations?

Program partners must submit all of their nominations no later than November 30, 2022. However, most will set deadlines and make submissions well before this date in order to present medals during the Platinum Jubilee year.

Commemorative medals have a long and rich tradition that goes back to the Middle Ages.  It became customary for monarchs to have medals struck to commemorate their coronation and other important events. For instance, during a coronation ceremony, velvet pouches were passed down the aisles of Westminster Abbey so that all those in attendance could select a medal as a personal memento of the historic event. Medals were awarded to the members of the Royal Family and their servants, to officers of the state and the government, to mayors, civil servants, members of the armed forces and the police who took part in the celebrations of the Coronation.

In 2005, the first officially recognized provincial commemorative medals created by Alberta and Saskatchewan, marked the 100th anniversary of their entry into Confederation.  The medals were created through provincial legislation and received Royal Assent by the Lieutenant-Governor. They were also approved for wear by the Government of Canada and have been integrated in the order of precedence for orders, decorations and medals.

The Queen’s Platinum Jubilee Medal (New Brunswick) was created in 2022 by an Order-in-Council approved by Her Honour the Honourable Brenda L. Murphy, Lieutenant Governor of New Brunswick, representative of The Queen in the province. The medal is being awarded to 3,000 deserving New Brunswickers through collaboration with provincial partners to ensure an equitable representation of all regions and all fields of endeavor.

The Platinum Jubilee Medal is a tangible way to publicly acknowledge the work and dedication of those, who are actively contributing to our province and country.

All content © Government of New Brunswick. All rights reserved.