FREDERICTON (GNB) – Designs for the new Fredericton courthouse, which will be located on King Street between Regent Street and Carleton Street, were revealed today.

“The 11,055-square-metre (119,000-square-foot), six-storey building will provide the space required to meet the needs of the clients of the judicial district of Fredericton,” said Transportation and Infrastructure Minister Jill Green. “Our focus is on balancing our needs with our fiscal reality, but we are pleased to hear that the new courthouse is part of a number of new development projects planned for this area.”

The Department of Transportation and Infrastructure provided context and operational observation from the Moncton and Saint John courthouse buildings. This provided a starting point for Toronto architects, Montgomery-Sisam, who partnered with a local firm, Goguen Architecture, to create a design that meets all of the requirements.

“We are pleased to be developing a modern courthouse to serve the Fredericton region,” said Justice and Public Safety Minister and Attorney General Hugh J. Flemming. “This new courthouse will provide what we need - an effective, safe and accessible space for everyone participating in the justice system. We are investing to serve current and future generations.”

The new building will include a detention area, offices for sheriffs, as well as a lobby and security screening area. There will be 10 courtrooms to provide for the provincial courts, the Court of Queen's Bench and the Court of Appeal. In addition, there will be two hearing rooms, a police office, accommodations for judges and spaces for: victim services, legal aid, family crown services, court client services, Crown prosecutions, probation services, a barristers library and suite, and the offices of the registrar of the Court of Appeal.

The building will have an extensive audio-visual system for remote operations, a secure file storage system and extensive security measures.

“The new courthouse project is among a series of public and private sector initiatives on undeveloped land in the heart of Fredericton,” said Green

Work on the new courthouse will begin later this year and is expected to be complete by 2025.

As of Jan. 1, 2022, the Family Division of the Court of Queen’s Bench will return to the Fredericton courthouse on Queen Street. The Trial Division will hear all matters, including jury trials, at the courthouse in Burton.

All filings of the Court of Queen’s Bench for the judicial district of Fredericton will continue to be received by the clerk’s office in Fredericton.

Hearings of provincial court and the Court of Appeal will continue to be heard at the Fredericton courthouse. 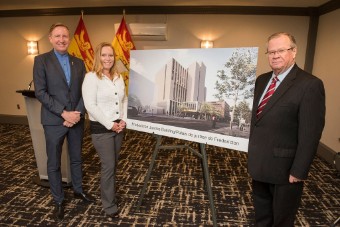