Office of the Premier
Tourism, Heritage and Culture

SAINT-QUENTIN (GNB) – A new multi-functional lodge and a fuelling station for snowmobiles will enhance winter activities this season at Mount Carleton Provincial Park.

“With its above average snowfall, breathtaking landscapes and world-class trails, New Brunswick offers many extraordinary winter experiences to residents and to visitors from around the world,” said Premier Blaine Higgs. “A fueling station for snowmobilers and a new lodge this winter will attract even more people to the area, to strengthen our province’s reputation as a top winter tourism destination and to generate economic growth for several communities in the region.”

The lodge will provide visitors with a year-round gathering space to relax and find information on activities available at the park such as hiking, snowshoeing, skating and camping. Rental services for snowshoes and cross-country skis will also be available. The facility will also feature interpretive and educational components as well as Indigenous artwork.

“The new lodge will provide an exceptional gathering place for all park visitors,” said Tourism, Heritage and Culture Minister Robert Gauvin. “Mount Carleton Provincial Park will not only offer well-maintained trails for everyone and a strategic place to buy fuel for snowmobilers but will also contribute to our efforts to make New Brunswick a first-choice tourist destination for all seasons.”

The new fueling station is being operated by Maliseet Fuels, a business from the Woodstock First Nation, which was selected as the successful proponent following the completion of a public request for proposals process.

The station supports the Christmas Mountains Trails Network, an initiative that represents a decade of collaborative work between all levels of government, the First Nations, the New Brunswick Federation of Snowmobile Clubs and several other partners. When completed, it will offer hundreds of kilometres of groomed snowmobile trails. It also contributes to the Northern Odyssey snowmobile experience, a 1,500 km trail network that links the cities of Miramichi, Bathurst, Campbellton and Edmundston, as well as the Chaleur and Acadian Peninsula regions.

New Brunswick has more than 8,000 km of snowmobile trails maintained by local branches of the New Brunswick Federation of Snowmobile Clubs.

According to the federation, about 21,000 trail permits were sold in 2019, a 9.5 per cent increase from the season before.

“Snowmobiling provides significant social and economic benefits to New Brunswick,” said Higgs. “The latest data showed snowmobiling tourism had an economic impact of $32.7 million in 2015, but we know that number is continuing to grow.” 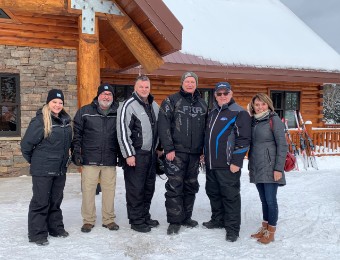