Last February, MacMaster captured a silver medal in the vault category during his second time participating in the Canada Winter Games. His achievement marks the first medal for Team New Brunswick in men’s artistic gymnastics in 24 years.

MacMaster was selected for the award by a committee assembled by the Department of Tourism, Heritage and Culture to consider athletes nominated by coaches and managers who participated in the 2019 Canada Winter Games.

“The New Brunswick artistic gymnast was chosen for being able to overcome a challenging week thanks to perseverance and resilience,” said Tourism, Heritage and Culture Minister Robert Gauvin. “I congratulate this top athlete, and also all the other coaches, officials and volunteers that were nominated for a Sport NB Konica Minolta Award last weekend.”

Athletes selected for this award must exhibit great perseverance, athletic excellence and sportsmanship. They must also demonstrate a significant contribution to Team New Brunswick’s effort in the Canada Games.

“To have won such an award is a huge honour and I am very thankful to have been selected,” said MacMaster. “I am also thankful for everyone who helped me along the way for supporting me.” 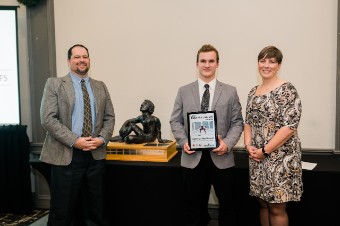