“Mr. McDonnell received this award for his outstanding, decades-long work with children living in the autism spectrum to promote their inclusion and respect for their diversity,” said Chiasson. “He was instrumental in creating autism intervention training programs for front line staff and for health and education specialists who guide each child’s individual program.”

“I am very grateful to the commission for the recognition of my work in the field of autism,” said McDonnell. “It is extremely important that we recognize and affirm the rights of all people with unique differences from the general population as well as people with disabilities, so that everyone can benefit from similar opportunities.

“In a field as complex and diverse as autism, it takes a village of people working together to change things. I am honoured to receive this award, but I am also honoured to have been inspired, over the years, by so many people living under the autism spectrum as well as by families, professionals, and government officials who have helped make New Brunswick a society that respects the rights of all.”

The commission presented the first Youth Human Rights Award which highlights the ability of young people to engage in promoting the values associated with human rights, such as respect, appreciation for diversity and the absence of discrimination.

The award was presented to the Grade 4 to 6 of École Abbey-Landry for their project called L’espoir d’avenir.

“These students have been proactive in promoting educational projects that strengthen integration, and they have expressed their vision of successful inclusion,” said Chiasson. “They decided that they wanted to live in a society where the rights of every child are respected, and they have invested in concrete actions that place value on inclusion and diversity.”

“Our students are giving us hope of a promising future with their new creation but let us not forget that these young people are already making a big contribution to society and to our communities,” said Chris Wheaton, vice-principal and music teacher at École Abbey-Landry. “The school staff are very grateful to the Human Rights Commission, through this award, for giving a voice to these young people who have an important message to pass along. There is an African proverb that says it takes a village to raise a child but let us not forget the reverse. It takes committed young people to raise a community to its full potential. These children are full of ideas, so stay tuned.” 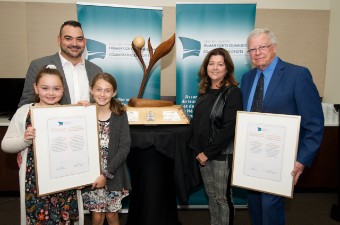