May is Sexual Assault Awareness Month

“Sexual assault and sexual violence have a profound and lasting impact on the lives of women in every community in our province,” said Wilson. “Eliminating sexual violence is a collective responsibility. We must work together to create safe, inclusive communities where violence is not tolerated.”

Sexual Assault Awareness Month encourages people to think about the role they can play in eliminating such behaviour.

In addition to signing the declaration, Wilson toured the centre with executive director Lorraine Whalley.

“It is always great to have the opportunity to meet with stakeholders and discuss matters that are important to New Brunswickers,” said Wilson. “The Fredericton Sexual Assault Centre provides essential services to survivors of sexual violence in our province. We are proud to partner with them and other community-based organizations as we continue to work toward a future free from violence.”

The centre has been supporting women for more than 40 years through its 24-hour crisis line, counselling services, and education and awareness programs.

“Our campaign recognizes that everyone has a role in preventing and responding to sexual violence, whether it is offering support to someone we know who has been sexually assaulted, calling out someone’s victim-blaming attitudes or finding opportunities to get involved in our own community,” said Whalley.

The provincial government’s Women's Equality Branch funds programs such as Domestic Violence Outreach and the Second Stage Housing Program. It is also implementing Preventing and Responding to Sexual Violence in New Brunswick: A Framework for Action. The intent of the framework is to build collaboration with government and community to address the issue of sexual violence through the sharing of information and best practices with a goal of enhancing the level of service provisions for victims. 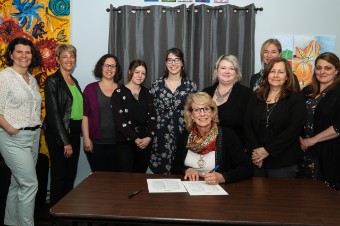