Higgs sworn in as 34th premier of New Brunswick

FREDERICTON (GNB) – Premier Blaine Higgs and the members of the Executive Council were sworn in during a ceremony today at the legislative assembly in Fredericton.

“I am honoured to accept the responsibility bestowed upon me by the people of this province,” said Higgs. “I know that many people are disconnected from politics because they feel like they do not have a say and they do not trust the process. It is time to do things differently. We are committed to bringing back open, honest and accountable government. This is the first step to creating a province we will be proud to pass on to our children and grandchildren.”

The ceremony for the premier and ministers was presided over by Lt.-Gov. Jocelyne Roy Vienneau and witnessed by members of the legislature and invited guests.

In his first address as premier, Higgs impressed upon his new cabinet the important duty being placed upon each of them.

“We must not lose sight of this unique opportunity that has been presented to us; the opportunity to actually change political behaviour in our province for generations to come,” said Higgs. “I have confidence that the new cabinet members, and all members of the legislative assembly, will remember that it is our duty each and every day to serve the people of New Brunswick. We are committed to working hard for, and with, New Brunswickers to put the province before politics and deliver results.”

On Oct. 22, 2016, he was elected leader of the Progressive Conservative Party of New Brunswick.

Born in Woodstock, Higgs graduated from the University of New Brunswick with a Bachelor of Science degree in mechanical engineering. Following university, he joined Irving Oil Ltd. where he held numerous positions of increasing responsibility in engineering, refining operations and in the transportation sector. Prior to retirement in May 2010, he was director of logistics and distribution, with overall responsibility for the transportation and bulk storage requirements for the reliable supply of refined products to customers throughout Eastern Canada and New England. He also served on the board of directors for Canaport LNG and the New Brunswick Gateway Council.

He has travelled extensively for both business and pleasure. The insight learned through this interaction with different cultures provides him with an appreciation for the challenges that New Brunswick faces in the global economy.

A long-time resident of Quispamsis, he is married to Marcia, and the couple have four daughters: Lindsey, Laura (Reid Gilmore), Sarah (Jeff Wilkinson) and Rachel. They are also blessed with two grandchildren, Nadia and Alexander Gilmore.

Gauvin was elected to the legislative assembly in 2018 for the riding of Shippagan-Lamèque-Miscou.

He has worked in theatre for over 25 years, writing more than 50 plays for theatre companies and Acadian institutions in the province. He has won several national and provincial awards, including the Prix Masque in 2003 for the best production outside of Quebec for the play Univers.

Gauvin has also been involved with teaching and training Acadian youth throughout his career, as well as promoting Acadian culture across Canada. He is a strong advocate for the rights of francophones.

First elected to the legislative assembly in 1999 as the member representing the electoral district of Saint John Portland, Holder was re-elected for his sixth term in 2018 representing the riding of Portland-Simonds.

He has served as minister in the portfolios of Environment and Local Government; Tourism and Parks; Wellness, Culture and Sport; and Culture, Tourism and Healthy Living.

Holder has served as deputy Speaker as well as official Opposition deputy House Leader and official critic for issues related to the environment, social development, post-secondary education, poverty reduction, the Labour and Employment Board, and WorkSafe NB.

Urquhart was re-elected for his fourth term in the legislative assembly in 2018 for the riding of Carleton-York.

After being elected in 2006, Urquhart served as official Opposition critic for issues related to public safety, the New Brunswick Police Commission and Kings Landing Historical Settlement.

Shephard was elected to the legislative assembly in 2010 for the riding of Saint John Lancaster. She was re-elected for her third term in 2018.

In 2012 Shephard was sworn in as Minister of Healthy and Inclusive Communities. She has been a member of several legislative committees that touch on community such as business, policy, and health care. Shephard has also served as official Opposition critic for human resources and women’s equality.

Prior to becoming an MLA, Stewart served on the Blackville Municipal Council from 2008 to 2010.

Wetmore was first elected to the legislative assembly in 2010 as the member for Grand Lake Gagetown. He was re-elected for his third term in 2018.

Wetmore has served on various committees, most notably the standing committee on crown corporations and the select committee on cannabis. He has served as official Opposition critic for Tourism, Heritage and Culture and Natural Resources.

Prior to her time as an MLA, she served on the Riverview Town Council. She was elected in 2004, served as deputy mayor in 2005 and was re-elected in 2008. She served as liaison councillor for finance, special projects, environmental strategies, and tri-council for the three municipalities.

Flemming was elected to represent the riding of Rothesay in a byelection on June 25, 2012. He was re-elected for his third term in 2018.

Flemming has served as Minister of Health and Attorney General.

He practised law for more than two decades, specializing in corporate, commercial, securities, and transportation law, and was appointed Queen’s Counsel in 1992. Flemming owns several successful businesses, but has recently retired from active management.

Carr was first elected to the legislative assembly in 2014 for the riding of New Maryland-Sunbury and was re-elected in 2018.

Carr has 25 years of experience as co-owner of a small business within the trucking, excavation and forestry industry with his late father Basil.

He has spent 20 years involved in politics, helping his twin brothers Jody and Jack in their election campaigns.

Oliver was first elected to the legislative assembly in 2014 for the riding of Kings Centre and was re-elected in 2018.

Oliver was the deputy whip for the official Opposition, the Opposition critic for Worksafe NB and a member of the legislative administrative committee. His political career includes serving as an executive assistant to the Speaker, the Minister of Supply and Services and the Minister of Finance.

Anderson-Mason was elected to the legislative assembly in 2018 for the riding of Fundy-The Isles-Saint John West.

Anderson-Mason attended the University of New Brunswick in Fredericton and earned a bachelor of arts degree with double honours in political science and history in 1998 and a bachelor of law degree in 2001. She was called to the New Brunswick bar in 2002. She worked for the firm of Clark Drummie in Saint John before returning to Charlotte County in the fall of 2006, where she opened her own practice. She is a past chair of the Canada Pension Plan Appeals Tribunal, former counsel to the New Brunswick branch of the Canadian Cancer Society, and parent school support committee member for Fundy Middle and High School.

Cardy was elected to the legislative assembly in 2018 for the riding of Fredericton West-Hanwell. He served as chief of staff to the Leader of the Official Opposition from 2017-2018.

Cardy has also worked for the Canadian Department of Foreign Affairs on the campaign to ban landmines; for the Washington-based National Democratic Institute for International Affairs in increasingly senior managerial roles, living and working in countries across Asia and Africa; and then as Asia-Pacific director for the Ottawa-based Forum of Federations.

Holland was elected to the legislative assembly in 2018 for the riding of Albert.

He has been an avid outdoorsperson his whole life and is a tireless advocate for natural resources and tourism opportunities in the province. He is the co-founder of the Canadian Wild Turkey Federation, a non-profit organization that is becoming the new face of conservation in Canada. Holland also owns a business that sells outdoor gear he invented.

Thompson was elected to the legislative assembly in 2018 for the riding of Saint Croix.

During his time in Ottawa, he served as Veterans Affairs Minister, as well as the critic for the Atlantic Canada Opportunities Agency, Public Accounts, Health, Regional Development, the Treasury Board and Human Resources Development. Thompson was co-chair of the Canada-United States Inter-Parliamentary Group from November 2004 until February 2006.

Wilson was elected to the legislative assembly in 2018 for the riding of Oromocto-Lincoln-Fredericton.

Wilson grew up in a military family in the Oromocto area and knows the importance and struggles of the military, the members, and their families. 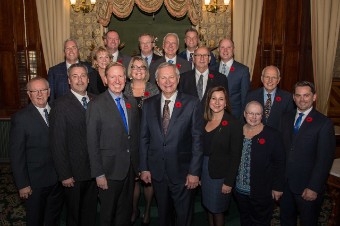