MONCTON (GNB) – The provincial government is adding two new school buses to its fleet of electric vehicles in time for the new school year. The buses, purchased by the Department of Transportation and Infrastructure, will transport students to and from school beginning on Tuesday, Sept. 5, as a pilot program.

“Your government is committed to addressing climate change by embracing green technology,” said Treasury Board President Roger Melanson. “By adding to our fleet of electric vehicles, we are reducing emissions and decreasing our carbon footprint.”

One of the new buses is assigned to the Anglophone East School District while the other will be used by the Francophone South School District. Both will operate in the Moncton area.

“The students who ride these buses on the first day of school will become part of New Brunswick history,” said Melanson. “Travelling on electric buses to school every day will hopefully inspire them to incorporate green-friendly initiatives into their family lives, as well.”

The provincial government’s climate change action plan, Transitioning to a Low-Carbon Economy, recognizes the government’s role in providing leadership and modelling the behaviour necessary to address the challenges and opportunities presented by climate change.

As part of its commitment to this plan, the Department of Transportation and Infrastructure is adding electric vehicles to the provincial government fleet. Eleven Chevrolet Volt plug-in hybrid vehicles are to be delivered early next year.

In July, the government joined NB Power in launching the eCharge Network, a group of public vehicle-charging stations around the province. The government continues to work with NB Power and private partners to further develop the network. 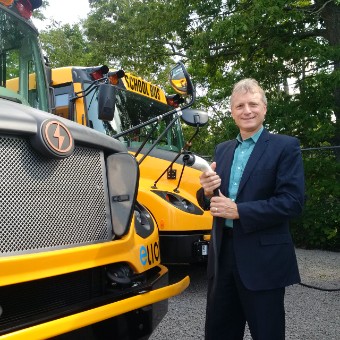