Investment of $10 million to address generational poverty in Saint John

“By working with community leaders in Saint John, we will have the most collaborative and strategic effort to reduce poverty we have ever seen right here in the Port City,” said Premier Brian Gallant. “When we lift people out of poverty we are strengthening our workforce and the New Brunswick economy.”

The Social Innovation Fund will support innovation projects and initiatives that strive towards ending generational poverty in Greater Saint John. All initiatives that receive support from the fund will be evidenced-based and evaluated to determine their potential impact and scalability.

The new fund complements efforts of reducing poverty in New Brunswick such as: increasing the minimum wage; implementing pay equity across more groups of employees; expanding the Home Energy Assistance Program; investing more in education than ever before in the province’s history; introducing the free tuition program for publicly funded post-secondary education institutions; earmarking a $7 million per year investment in literacy programming for both children and adults; increasing access and affordability for child care; and, in partnership with the federal government, investing more than $56 million in affordable housing, and enhancing the Canada Pension Plan.

“We understand that the best social program is a job, coupled with the opportunity to be educated and trained to do that job,” said Gallant. “That is why we are the government that has invested the most in education in the history of our province."‎

The fund represents a strategic partnership between the government and Living SJ to test new initiatives to help end a lifetime of poverty for children.

“This fund is a game-changer for our community and the province,” said Living SJ executive director Donna Gates. “It will demonstrate how government, business, non-profits and neighbourhoods can collaborate to bring about lasting change.”

Saint John will serve as a testing site for new approaches to reducing poverty and strengthening social conditions vital to economic growth. Living SJ provides a platform for the creation of new policies, services and programs aimed at benefitting residents and providing a significant return on investment.

"Living SJ will bring exciting ideas forward and be nimble in our approach," said Paulette Hicks, co-chair, Living SJ. "We will explore opportunities to scale the most successful projects and share our learning across New Brunswick."

Funding will consist of $2 million per year through the Regional Development Corporation and the Department of Social Development.

The fund will not replace current government investments in foundational community programs with the goal of ending generational poverty in Saint John. 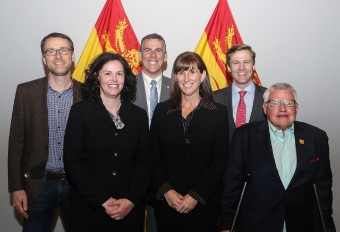