FREDERICTON (GNB) – The 2017-18 provincial budget tabled in the legislature today aims to demonstrate that the government is listening to New Brunswickers, honouring its commitments, and investing responsibly in areas that will lead to a stronger New Brunswick.

“Over the first half of our mandate, our government has worked closely with New Brunswickers,” said Finance Minister Cathy Rogers. “Together, we developed a plan for restoring balance to our finances, while investing in the priority areas that reflect our collective values. From day one, jobs, education, and health care were identified as priorities, and they remain so today.”

During pre-budget consultations Rogers listened to New Brunswickers who said that they would like the government to get the province’s finances in order, but not at the expense of social programs.

“We are taking a balanced approach and reducing the deficit in a steady, responsible way,” said Rogers. “We are meeting our financial targets, and what is even more significant is that we have been able to do this without making deep cuts to the programs that New Brunswickers hold dear.”

The New Brunswick economy is projected to grow by 0.6 per cent in 2017, its third consecutive year of growth, while a deficit of $191.9 million is projected for 2017-18, continuing the steady, downward path as the province aims to return to fiscal balance by 2020-21.

The 2017-18 budget includes record investments in education and health care.

Since 2014 the government has successfully cut the province’s deficit in half, and is on track to eliminate the deficit by the 2020 budget, as reaffirmed today. New Brunswick has seen economic growth hit a 10-year high in 2015, with projections of continued growth in 2016 and 2017. In addition, the government supported the creation of almost 10,000 jobs since 2014, while employment has increased by 5,300 since June 2016.

The 2017-18 Budget Speech and accompanying documents is available online. 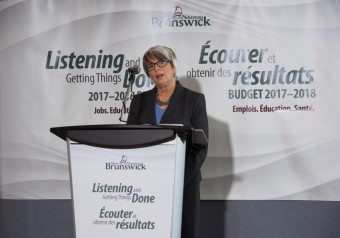