Energy and Resource Development
Office of the Premier

FREDERICTON (GNB) – An agreement has been reached that will end Enbridge Gas New Brunswick lawsuits totalling more than $800 million dollars against the provincial government.

The announcement was made by Premier Brian Gallant and Cynthia Hansen, the company’s president of gas distribution and power.

The deal will also renew the company’s franchise agreement with the government and is expected to bring greater stability to natural gas distribution rates.

“Today, we are removing the potential of an enormous financial burden from the backs of every New Brunswick taxpayer,” said Gallant.

A bill passed in 2011 altered the terms of the company’s original contract with the government, which was signed in 1999.

Under terms of the new agreement, for the balance of the current franchise agreement of two more years, annual increases in distribution rates and tariffs for homeowners are capped at three per cent (unless electricity rates increase by more than three per cent), and thereafter are subject to approval by the independent regulator, which has a mandate to protect consumers. At the same time, under this framework, rates for businesses will be flat or decreasing, allowing them to become more competitive with jurisdictions with lower gas costs.

Enbridge Gas New Brunswick’s gas distribution franchise will be renewed and the company will be able to recover a portion of the deferral account owed under that previous contract.

“The two parties have been able to negotiate an agreement that will bring rate stability to consumers and allow increased regulatory oversight,” said Gallant. “This will help deliver energy in a competitive way to New Brunswickers and New Brunswick businesses.”

Energy and Resource Development Minister Rick Doucet acknowledged the efforts of the government’s legal team and department staff in reaching an agreement aimed at protecting the interests of taxpayers, ratepayers, the government and the company.

“Since 2012, Enbridge has significantly scaled back investment in infrastructure in New Brunswick,” said Doucet. “With this agreement in place and the lawsuits resolved, the company now has the opportunity to reinvest in our province, spurring economic activity.”

Highlights of the agreement include: 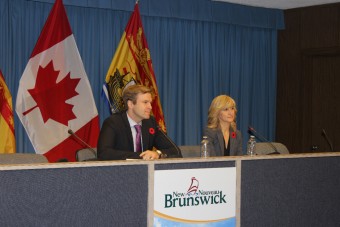