MONCTON (GNB) – The provincial and federal governments have announced a bilateral agreement that will make more than $176 million in combined funding available under two new federal programs, the Clean Water and Wastewater Fund and the Public Transit Infrastructure Fund.

“We understand that New Brunswickers want their government to focus on the economy, education and health care,” said Premier Brian Gallant. “Investments like these help get things done in these priority areas.”

The agreement is part of Phase 1 of the 10-year Investing in Canada plan, which will help lay the foundation for the longer-term federal investment strategy.

“Infrastructure is the foundation of the Canada we want to build for tomorrow,” said Fisheries, Oceans and Canadian Coast Guard Minister Dominic LeBlanc. “The federal government recognizes that we need a solid partnership with all orders of government to support infrastructure and create good, well-paying jobs that help the middle class grow and prosper now and in the future. We are very pleased to have reached an agreement with New Brunswick, which will make $176 million in funding available and allow communities across the province to address their specific infrastructure priorities.”

Under the Clean Water and Wastewater Fund, the provincial government is providing $19,858,713 and the federal government is providing $39,717,426 for the current intake of 47 projects across the province. Combined with municipal contributions, a total of $79,434,852 will be invested to help provide New Brunswick families with clean, reliable water and wastewater services.

Under the Public Transit Infrastructure Fund, the federal government is providing $8,652,604 and municipalities are providing $8,708,312 to support four public transit projects. 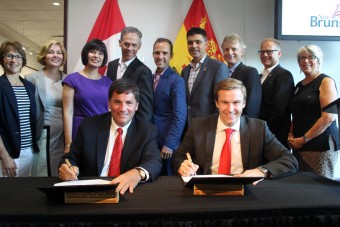