CAMPBELLTON (GNB) – The Environmental Trust Fund is providing about $73,000 to support green jobs and environmental projects in the Campbellton region.

“We are proud of the many innovative initiatives supported through the Environmental Trust Fund, and we are particularly proud that so many young New Brunswickers find employment with the proponents,” said Post-Secondary Education, Training and Labour Minister Donald Arseneault. “The fund is designed to benefit our province’s air, land and water, but it also supports the green economy and creates jobs throughout the province.”

The announcement was hosted by the Restigouche Regional Service Commission, who received $40,000 to co-ordinate a variety of environmental awareness activities and to hire a summer student. The organization will promote the province’s new and upcoming e-waste program and the region’s longer term plans to begin curbside recycling.

“We are pleased to have the government’s support as we work to increase awareness of recycling in our region,” said Michel Soucy, chair of the commission. “We are focused on reducing the amount of waste that is sent to the landfill, which starts with increasing awareness, education and ultimately participation in recycling efforts.”

The Environmental Trust Fund provides assistance to community groups, organizations, municipalities and institutions for projects that produce tangible, measurable benefits to the environment.

A total of 207 projects valued at $6.5 million have been approved under the fund.

In addition, another $1.5 million has been set aside to support environmental initiatives.

More information, including the list of approved projects and initiatives, is available online. 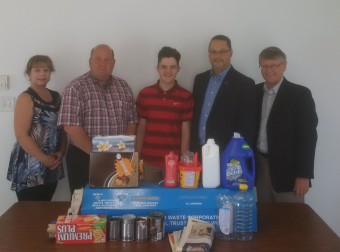