Education and Early Childhood Development
Office of the Premier

New school to be built on Dieppe Boulevard

DIEPPE (GNB) – A new school with a projected cost of $34.7 million will be built on Dieppe Boulevard in Dieppe.

The provincial government confirmed today that the construction of the new Grade 3 to 8 school will relieve overcrowding at École Amirault, École Carrefour de l’Acadie and École Mathieu-Martin in the Francophone Sud school district.

“A strong education system is key to the future of New Brunswick’s economy,” said Premier Brian Gallant. “That is why investments like this in education are so important.”

Preparation of the site began earlier this month, and building construction is set to start in August. The new school will be ready for students at the start of the 2018-19 school year.

Once construction is complete, École Amirault will become a kindergarten to Grade 2 school, allowing the existing infrastructure to accommodate the growing student body.

“We must deal with the overcrowding that these schools have been seeing so we can offer the best learning environment possible,” said Transportation and Infrastructure Minister Roger Melanson. “This important project reflects the growth that this region is seeing.”

The new school will accommodate up to 1,020 students. It will have a cafeteria, a science laboratory, two gyms, two music rooms, a performing arts room, a library and multipurpose rooms, as well as 40 classrooms and other spaces.

“This is the best solution to the growing student population in Dieppe,” said Gérald McKen, chair of the district education council. “By building a new school, we can ensure all students benefit from a better school environment.”

The project falls within the framework of the Department of Education and Early Childhood Development’s capital budget. In 2016-17, the provincial government will invest $108.6 million in infrastructure and improvements for schools. 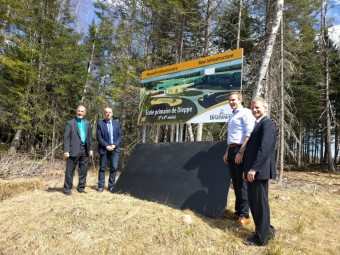