FREDERICTON (GNB) – The provincial government has appointed a commission to study the issue of hydraulic fracturing and determine whether conditions outlined by the government can be met.

“Our government is focused on diversifying our economy in order to create jobs,” said Energy and Mines Minister Donald Arseneault. “That includes the responsible development of our natural resource and energy projects. It is responsible and prudent to do our due diligence and get more information regarding hydraulic fracturing.”

The members of the Commission on Hydraulic Fracturing are:

The moratorium will not be lifted unless there is:

“I am confident in the ability of the members of this commission to lead this important work for the benefit of all New Brunswickers,” said Arseneault. “I thank them for taking on this task that will give us more information about this industry and its impact on people’s health, water and the environment through evidenced-based research.”

The commission will report back to the provincial government with its key findings within one year.

In December 2014, the provincial government introduced amendments to the Oil and Gas Act that placed a moratorium on all types of hydraulic fracturing in New Brunswick.

Following are the biographies of the three commissioners:

Richard graduated with a law degree from the University of New Brunswick before settling down in his home town of Bouctouche. After a distinguished legal career in Bouctouche from 1958 to 1971, he was appointed to the bench, serving the Northwest counties of the province. In 1976, he was appointed to the Court of Queen’s Bench and in 1979 was promoted to serve as a justice of the New Brunswick Court of Appeal. In 1982, Richard was named Chief Justice of the Court of Queen’s Bench until his retirement in 1994. He later served as an adjudicator and mediator before being appointed Chair of the Federal Electoral Boundaries Commission of New Brunswick in 2004. He officially retired from judicial duties in the summer of 2007.

In 1987, the University of Moncton offered him an honorary doctorate degree for his lifelong achievements and in 2001, he led a committee on the future of the Université de Moncton, helping the university set its future course as a comprehensive, francophone institution of higher learning and research. In 2014, he was named to the Order of New Brunswick.

McLaughlin is a former president of the University of New Brunswick and holds the honorary position of president emeritus at UNB. He is currently scholar in residence at the Dr. J. Herbert Smith Centre for Technology Management and Entrepreneurship at UNB. McLaughlin has an academic background in engineering and institutional economics. He has been an international leader in global geomatics and has worked in more than 40 countries with the World Bank, the United Nations and other organizations. He has authored or co-authored more than 200 publications, including three books.

Atlantic Business Magazine has recognized McLaughlin as one of the top chief executive officers in Atlantic Canada. He has received the Lieutenant-Governor's Award for Excellence in Public Administration and the Queen Elizabeth II Jubilee Medals (Golden and Diamond). He is a member of the Order of Canada and the Order of New Brunswick.

Robertson is a life-long educator, administrator and community volunteer in New Brunswick. During her more than 30 year professional career, she served as a teacher, guidance counsellor and vice-principal in the public school system, before moving to the post-secondary education system, including board chair of the New Brunswick Community College (NBCC) and principal at the NBCC campus in Saint John.

As an advocate for public education and an active community leader, Robertson has received numerous awards, including recognition from the Institute of Public Administration Canada, the Lieutenant-Governor’s Award for Excellence in Public Administration and the Commemorative Medal for Queen Elizabeth II’s Diamond Jubilee. Most recently, Robertson was named Honorary Lieutenant Colonel of the 37 Signal Regiment (CAF Reserve). She is a member of the Order of New Brunswick. 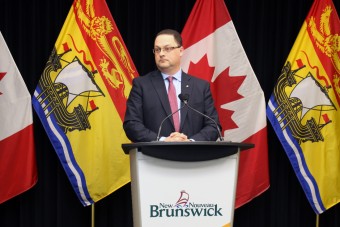