FREDERICTON (GNB) – Premier Brian Gallant today announced that three private sector leaders will be joining the leadership team of the New Brunswick Jobs Board secretariat. These individuals will work to create the conditions for economic growth in New Brunswick.

“Our number one priority is job creation and with these individuals joining the Jobs Board we will continue to focus on growing our economy,” Gallant said. “They will work to set the conditions for growth so that we can help our province’s businesses and entrepreneurs create jobs which will, in turn, help improve our finances.”

The secretariat will provide support to the Jobs Board, which is chaired by Gallant with Economic Development Minister Rick Doucet as vice-chair.

The private sector leaders joining the Jobs Board secretariat leadership team are:

“It is exciting to have dedicated and talented New Brunswickers such as Jacques, Susan and David join our team as we put our efforts towards growing the economy. These individuals each join government with a strong and diverse background in the private sector,” Gallant said.

"The time is right to change the way we approach economic development and job creation in New Brunswick," Pinet said. "It is clear the status quo is not working. Jobs Board represents a fresh opportunity to re-invigorate our economy. I am honoured to be part of these efforts."

"New Brunswick has a history of entrepreneurship and innovation," Holt said. "I am looking forward to working with our business community to unleash their ideas and establish the kind of environment that will lead to job creation and prosperity in today's economy."

"Together, Opportunities NB and Jobs Board will help the government better co-ordinate and evaluate job creation efforts," Campbell said. "Diversifying the economy, developing the workforce and making strategic investments in infrastructure are all examples of the way we can work towards the common goal of job creation."

“These individuals have the experience and the know-how to help drive our economy to create more jobs. I look forward to working with them,” said Economic Development Minister Rick Doucet.

This announcement is the latest in a series of initiatives which will advance the provincial government’s job creation commitments including the launch of the New Brunswick Jobs Board, the establishment of Opportunities New Brunswick and the recent hiring of its chief executive officer.

While vice-president of business development at Assumption Life, Pinet led his team in the development of the company’s distribution network from the Atlantic provinces and Quebec to include all the provinces and territories. Pinet joined Assumption Life in 2003 and during his time the company experienced unprecedented growth and is now well known across Canada. Prior to joining Assumption Life, Pinet practiced law, specializing in civil litigation He holds a bachelor of law degree from the Université de Moncton and has been a member of the New Brunswick and Canadian Bar Associations since 1996. He received his degree in business administration from the Université de Moncton. Pinet brings with him a wealth of experience in business development and a passion for the Province of New Brunswick.

In her role as president and CEO of the New Brunswick Business Council, Holt led 24 of New Brunswick’s foremost business leaders. Raised in Fredericton, she completed a bachelor of science in chemistry and a bachelor of arts, honours, in economics at Queen's University. She went on to sales, human resources and management roles with some of the world's most successful firms: Xerox, Manpower, HP, Cognos (now IBM) and Research In Motion (now BlackBerry). She served recently as CEO of the Fredericton Chamber of Commerce. 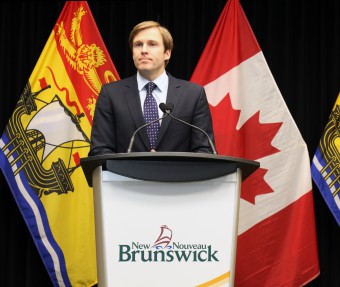