They reduce the provincial deficit, freeze taxes and provide strategic investments in programs, infrastructure and innovation. The operating budget includes a clear, multi-year plan to return to balanced budgets by 2017-18.

"Our government has a strong record of smart fiscal management and, as a result, we are well-positioned for economic growth over the next two years," said Finance Minister Blaine Higgs. "This budget will focus on putting our resources to work to create jobs and help small businesses, seniors and our most vulnerable, without raising taxes."

Despite expense pressures, spending is budgeted to grow by less than two per cent in 2014-15 and is $2 million less than what was projected in the multi-year plan presented in last year's budget. With expenses tracking at $201 million under budget in 2013-14, the provincial government is on pace to come in under budget on departmental spending for the third consecutive year.

The operating budget includes more spending-reduction initiatives across departments, including:

●    proceeding with continuous improvement and performance excellence processes;
●    reducing the number of MLAs to 49 from 55 in the next election; and
●    building on attrition successes to date.

Cost-saving measures will allow for new investments in 2014-15, including:

●    $16 million as part of a five-year, $80-million investment in innovation;
●    social assistance rates will be increased a further three per cent this April after being increased by four per cent last fall;
●    $27 million for the New Brunswick Drug Plan, which will provide affordable drug insurance to 70,000 families with no drug coverage;
●    $7.2 million for the new Home First Strategy, designed to help improve seniors' health and keep them in their own homes longer than before;
●    improving the Small Business Investor Tax Credit, which will provide increased access to capital for small businesses and allow for the creation of community economic development corporations;
●    funding to support the recommendations in New Brunswick's cultural policy; and
●    funding for those living with and supporting adult children with disabilities.

The provincial government will continue with its five-year, $37-million investment in the Growing Forward 2 innovation plan in agriculture.

The 2014-15 capital budget, totalling $555 million, closely follows the multi-year capital plan tabled in 2013-14 capital budget. Most of this budget will be used to maintain existing infrastructure. Only $35 million, representing 6.3 per cent of total capital spending, will be dedicated to new projects.

"Our capital budgeting process has become much more disciplined, with multi-year planning, and we have listened to our stakeholders seeking more funding for maintenance of our existing infrastructure," said Higgs. "We have limited new spending to only 6.3 per cent this year in order to limit increases to our net debt."

●    $223 million to repair and maintain transportation infrastructure, including funding that is part of a 10-year plan for safety upgrades on Route 11 between Shediac and Miramichi;
●    $213 million to maintain and improve health-care infrastructure. This includes initial funding for the Fredericton Community Health Centre;
●    $13 million to address space shortages at the Dr. Georges-L.-Dumont University Hospital  Centre in Moncton through the addition of a surgical suite;
●    funding for longer-term upgrades to the Dr. Everett Chalmers Regional Hospital in Fredericton and the Chaleur Regional Hospital in Bathurst; and
●    $99 million for school infrastructure. This investment includes the construction of a new kindergarten to Grade 8  school in Miramichi; a kindergarten to Grade 8 school in the Restigouche area; and funding will be allocated for planning related to École Champlain in Moncton. Work will start on renovations and additions at Gretna Green Elementary School in Miramichi and at Riverview High School.

The 2014-15 budget is a reflection of the public's input and help. The provincial government held stakeholder meetings in the north and south of New Brunswick, receiving more than 500 comments through the Taxpayers FIRST website along with 13 formal submissions from provincial organizations.

The provincial government will not raise gas, income or consumption taxes in 2014-15.

New Brunswick's personal income taxes will remain lower than those in the other Maritime provinces and Quebec.

Due to major efforts to update fees during the last two years, no major fee increases will be included in this year's budget, including any increases to motor vehicle licensing and registration.

Putting government's culture of performance excellence to work for taxpayers

The provincial government is seeing returns on the investments made in the performance excellence process. To date, more than 1,400 government employees have been involved in more than 400 projects, resulting in savings of more than $12 million. Examples of savings to date:

Smarter management of collection efforts in recent years has recovered $10.3 million; this approach is expected to achieve further savings. Employees from a number of departments are being centralized into a new collection services branch, which will lead to a consistent, focused approach on how outstanding receivables are addressed.

For the four fiscal years starting in 2011-12, the provision for loss expense, which includes unrecoverable loans made by the provincial government, is expected to average $13 million per year. This represents an improvement of 86 per cent from the previous four-year average of $93 million per year.

In 2014-15, the last wave of departments will be adopting the performance excellence methodology, resulting in additional savings to reduce the deficit and invest in priorities.

The health-care budget will be increased by two per cent in 2014-15. Due to smarter management, the Department of Health is projected to be under budget in 2013-14 for the second year in a row.

The department will continue to implement a number of efficiency and savings initiatives, which have allowed expenditure growth to be controlled in recent years. These items include reducing central office employees through attrition, delivering non-clinical services in the most efficient manner possible, and general efficiencies across the health-care system without reducing front-line service delivery.

In 2014-15 the provincial government will introduce changes – including new fiscal accountability legislation – to make it more accountable. The legislation will require the auditor general to report on the finances of the provincial government 60 days in advance of each fixed election date and political parties to provide an independent costing of their election promises to the public.

During the last two years, the provincial government has exceeded its three-year attrition target of 1,500 positions set in the 2012-13 budget. By not refilling positions left vacant through retirements and other reasons, a total reduction of 1,211 employees has already been achieved. All parts of the public service have been reduced by more than 2,000 positions since October 2010.

The changes to the retirement allowance policy announced in last year's budget have reduced the future liability by $62 million.

The provincial government has set a clear plan for a budgetary surplus by 2017-18. 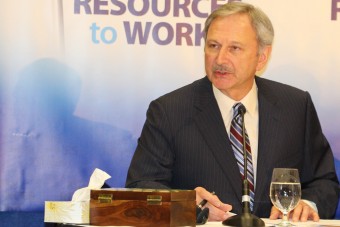