New members invested into the Order of New Brunswick for 2013

FREDERICTON (GNB) – Ten accomplished New Brunswickers were invested into the Order of New Brunswick today. The new members were inducted into the province's highest honour by the chancellor of the order, Lt.-Gov. Graydon Nicholas, at a ceremony at Government House in Fredericton.

“Today we welcome the 12th group of outstanding people into the distinguished ranks of the Order of New Brunswick,” said Alward. “Each of these remarkable individuals has contributed, through their professional and artistic accomplishments, volunteer commitments and personal involvement, to making our communities and our province a better place to call home.”

The new members of the Order of New Brunswick are:

●    Joanna Bernard, from the Madawaska Maliseet First Nation, for her tireless efforts to ensure the well-being and economic prosperity of her community as well as of all First Nations communities in the province.

●    Édith Butler, from Paquetville, for her remarkable contributions to the advancement of Acadian culture and heritage.

●    Alida Clément, from Dieppe, for her dedication and volunteer efforts to ensure the well-being and quality of life of disabled persons, seniors, and her community at large.

●    Eugène Durette, from Edmundston, for the impact he has had in advancing business in Edmundston and throughout the province, as well as the many ways in which he has given back to his community.

●    Dr. Dana Hanson, from Fredericton, for his outstanding leadership in the medical profession in New Brunswick and around the world.

●    Jean E. Irving, from Rothesay, for her passion and commitment to bettering the quality of life of communities throughout the province.

●    Freeman Patterson, from Kingston, for his exceptional talents as a photographer and his passion for sharing his skills and knowledge the world over.

●    Gerry Pond, from Saint John, for his innovative spirit and for being the driving force behind so many of New Brunswick's information technology and telecommunications success stories.

●    Gordon Porter, from Woodstock, for his efforts in advancing inclusive education and the rights of persons with disabilities in New Brunswick and throughout the world; and

●    Lionel Poitras, from Saint-André, for his contributions to ensuring the sustainability of the potato farming industry in our province.

The Order of New Brunswick was first awarded in 2002 to recognize individual New Brunswickers who have demonstrated a high level of excellence and achievement in their lives, volunteer work and careers and who have made outstanding contributions to the social, cultural or economic development and well-being of the province, its communities and its residents.

“The individuals we pay tribute to this year come from every part of New Brunswick and many different walks of life,” said Alward. “These men and women have shown through their actions and the great example they have set for all of us their great pride in and their commitment to our province.”

The 2013 inductees were presented with a medal representing the provincial flower and the shield of arms as well as a special ribbon in the same colours as the shield. Members of the order are entitled to use the initials ONB after their names. 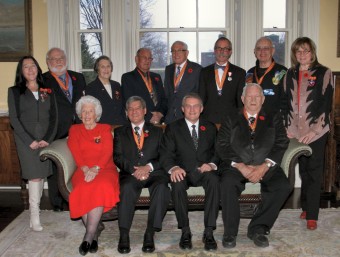